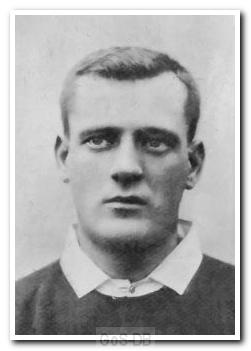 Note: (1) One record book says that the second goal against West Ham on 19th Sep 1903 was scored by Peddie, but the match report in the Western Morning News clearly describes the second goal as a free-kick (penalty) scored by Goodall after Peddie had been brought down. The goals-scored totals for each player are therefore different from at least one source. (2) At least two record books list Argyle's goalscorers for the FA Cup match against Freemantle on 14th Nov 1903 as Peddie (2), Winterhalder and Picken (2), but reports of the match in the Western Morning News, Western Evening Herald and other newspapers clearly describe the goals by Peddie, Picken (2), Jack and Anderson. The overall goal totals for Peddie, Winterhalder, Jack and Anderson are therefore different from some other sources.

Peddie, commonly known as either 'Jack' or 'Jock', began his career with Scottish junior side Benburb in his native Glasgow. In 1895 he signed for Third Lanark and spent two years there before joining Newcastle United following a successful trial.

A centre-forward, he had a magnificent record of 78 goals in 135 appearances for the Magpies, spending five seasons with the club and finishing as top scorer in four of them. He also played a significant part in the team that won promotion to the First Division in 1898. In 1902 he moved on to Manchester United, but stayed for just one season, despite scoring 11 times in 30 games, before joining Argyle.

Peddie wrote his name into the Argyle history books by scoring the first two goals for the newly professional club, one each in the first Western League and Southern League fixtures, and he also scored later in the club's first FA Cup tie. After just one season however, he chose to return to Manchester United, where he played for a further three years, becoming club captain and helping the club to win promotion to the top flight in 1906.

In 1907 Peddie returned to Scotland to play for Heart of Midlothian but suffered a serious knee injury which limited his appearances over the following two seasons. This eventually led to his retirement, although he did continue to play in amateur football until emigrating to the United States where he lived in Detroit until his death in 1928.

Greens on Screen is run as a service to fellow supporters, in all good faith, without commercial or private gain.  I have no wish to abuse copyright regulations and apologise unreservedly if this occurs. If you own any of the material used on this site, and object to its inclusion, please get in touch using the 'Contact Us' button at the top of each page. Search facility powered by JRank Search Engine. Hover facility courtesy of Milonic. UK time at page load: 03 December 2021, 13:09.