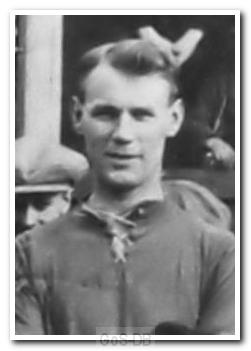 Born in Plymouth in 1891, Paltridge played local football for Woodland Stars, Crownhill and Woodland Villa before joining Argyle in August 1912. A right-half, he made only occasional appearances for the first team before leaving for Midland League side Chesterfield Town in April 1914. The outbreak of war saw Chesterfield Town put into liquidation but Paltridge returned to the town in 1919, signing for the newly formed Chesterfield Municipal, and helped the club win the Midland League title. In December 1920 the club became Chesterfield FC and the following year were founder members of the Third Division (North). Paltridge made 29 appearances during that first season of League football and also went on to play for Alfreton Town.

Greens on Screen is run as a service to fellow supporters, in all good faith, without commercial or private gain.  I have no wish to abuse copyright regulations and apologise unreservedly if this occurs. If you own any of the material used on this site, and object to its inclusion, please get in touch using the 'Contact Us' button at the top of each page. Search facility powered by JRank Search Engine. Hover facility courtesy of Milonic. UK time at page load: 19 June 2021, 00:36.