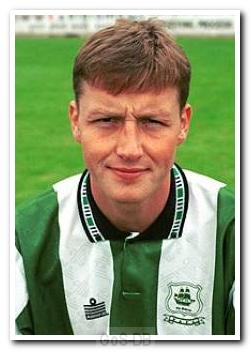 With new boss Peter Shilton desperate to boost his struggling team's attacking threat as 1991-92 drew to a close, he looked to Leyton Orient to supply what he hoped would be the ammunition to keep Argyle in the second tier. Kevin Nugent had come through the youth ranks at Brisbane Road, and had scored 13 goals in the third tier when Shilton had a £200,000 offer accepted by Orient. Nugent was thrust straight into a relegation dogfight for his new club, but broke a bone in his foot in only his second appearance and was out until the final home game of the season  a 3-1 defeat to Blackburn that saw the Pilgrims relegated.

Much maligned by some Argyle fans for his tendency to go long spells without scoring, Nugent still managed 13 and 17 goals respectively in each of the following two seasons  and his tireless running and off-the-ball strength created many more for his team-mates and endeared him to many of the Green Army's more sympathetic members.

He initially seemed to have survived Neil Warnock's summer cull of 1995 but, after appearing in the first six matches of 1995-96 (all of which were lost), Nugent was dropped and the subsequent 5-0 victory at Bury paved the way for a move to Bristol City. After spells at Cardiff, Orient (again) and Swansea, he hung up his boots and took his first steps in coaching and football management.

In 2007 he briefly became caretaker-manager of Swansea City, following the dismissal of Kenny Jackett, and then returned to his playing roots to become youth team manager and then coach/assistant manager at Leyton Orient. In 2009, 2010 and 2014 he was promoted to caretaker manager after a series of managerial dismissals in an unstable period at Brisbane Road.

In January 2016 Nugent was appointed first team coach at Luton Town before moving to Charlton Athletic six months later, where he again became caretaker-manager following the dismissal of Russell Slade (as coincidentally he had done when Slade was dismissed at Brisbane Road in 2014).

In February 2017 Nugent finally got the chance to lead outright when he became manager (chief coach) at Barnet. However, the job was short-lived; he was dismissed after less than two months in the role, with a winless record of four draws and six defeats.

Greens on Screen is run as a service to fellow supporters, in all good faith, without commercial or private gain.  I have no wish to abuse copyright regulations and apologise unreservedly if this occurs. If you own any of the material used on this site, and object to its inclusion, please get in touch using the 'Contact Us' button at the top of each page. Search facility powered by JRank Search Engine. Hover facility courtesy of Milonic. UK time at page load: 04 July 2022, 10:29.