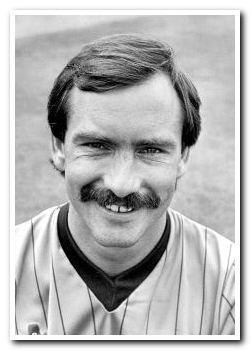 Despite his roots in the North East - Nisbet was born in Wallsend and had represented Northumberland Schools - his first professional club was West Bromwich Albion. He was signed by the Baggies in 1968-69 as a Goalkeeper and made his debut between the sticks in the 1969-70 season. Don Howe saw his potential as an outfield player during reserve team games, albeit in the 1971-72 season and he then spent four years as first choice right-back at the Hawthorns playing 136 times, including once in goal. He represented the England under-23 team alongside Frank Lampard Snr, Kevin Keegan and Mick Channon.

He moved on to Hull City in 1976, where he was virtually ever-present, playing 193 games and weighing in with a goal prior to a change of management which led to a transfer to Argyle in 1980 with Bobby Saxton bringing him to Home Park for £32,000.

He made his debut for Argyle on the 10th January 1981 and went on to play 334 games for the Pilgrims scoring on 17 occasions - many of them memorable thunderbolts. Nisbet was an ever-present in the promotion-winning 1985-86 team and also in the 1984 FA Cup team, which saw him help Argyle to the semi-final. In addition he played every league game for Argyle from the 1982-83 to the 1984-85 seasons, missing only a handful of games during his six-and-a-half-years at Home Park. He last wore the Argyle green on the 9th May 1987 aged 35.

An extremely attacking full-back, blessed with great speed, determination and a willingness to tackle with ferocity, he received the Player of the Year award in 1982-83 and a place in the PFA Divisional Team of the season.

He finished his playing career with a brief spell at Exeter City, playing on 12 occasions for the Grecians before getting his first injury of his career at 36, which forced him into non-league football with Ottery St Mary where he played and managed.

'Nissy' rejoined the staff at Home Park in 1990, managing the reserves and youth team, pulling on the green shirt for the reserves due to an injury crisis, managing to score in the process. Following the sacking of David Kemp in 1992, he acted as co-caretaker with Alan Gillett and also had two games as caretaker-manager at Home Park in 1992 before Peter Shilton was appointed. He then carried on with his duties with the reserves and youth team up until 1993.

Instead of hanging up his boots he traded them for a pair he could wear on the beat with Devon & Cornwall Police.

Many regard Gordon as one of Argyle's greatest-ever players and in 2004 he was voted into the club's Team of the Century.

Greens on Screen is run as a service to fellow supporters, in all good faith, without commercial or private gain.  I have no wish to abuse copyright regulations and apologise unreservedly if this occurs. If you own any of the material used on this site, and object to its inclusion, please get in touch using the 'Contact Us' button at the top of each page. Search facility powered by JRank Search Engine. Hover facility courtesy of Milonic. UK time at page load: 04 July 2022, 09:53.