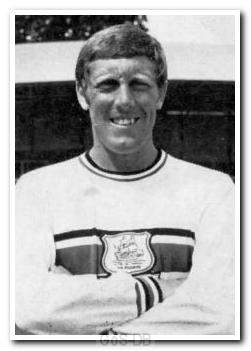 Neale began his career with non-league Ilford before joining Newcastle United in 1959, making over 100 appearances in his four years at St James' Park. Although he never quite made star status in his seven seasons with Argyle, he was an exceptionally strong, whole-hearted and popular half-back, and a member of the side that made the League Cup semi-finals in 1964-65. As well as a wing-half, he also played as a sweeper and full-back, and his versatility led to him being called 'the perfect substitute'. After his professional career came to an end, he played for Plymouth City.

Greens on Screen is run as a service to fellow supporters, in all good faith, without commercial or private gain.  I have no wish to abuse copyright regulations and apologise unreservedly if this occurs. If you own any of the material used on this site, and object to its inclusion, please get in touch using the 'Contact Us' button at the top of each page. Search facility powered by JRank Search Engine. Hover facility courtesy of Milonic. UK time at page load: 07 May 2021, 19:48.