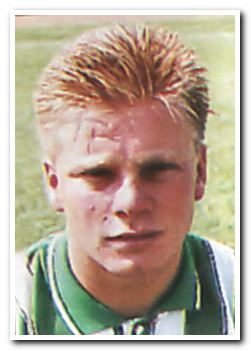 Ask any Argyle fan to describe the qualities they most look for in a player, and they'd most probably cite passion, commitment and local allegiance. In Andy 'Jock' Morrison, they had all three and plenty more besides.

Born in Inverness (hence 'Jock'), the Morrisons moved to Plymouth when Andy was a child, and watched on proudly as their son established himself as one of the finest talents in the city's youth leagues. Snapped up by Argyle, centre-back Jock made his League debut off the bench in a heavy defeat at Aston Villa in February 1988. Just 17 at the time, it was clear the adopted Plymothian had something special, and he went on to establish himself at the heart of the Argyle defence in an era of struggle for The Pilgrims. What Jock lacked in height, he made up for in heart, and his commanding presence at the back marked him out as one of the most coveted defenders outside the top flight in the early 1990s.

The arrival of Peter Shilton as manager in 1992 signalled the beginning of the end for Morrison's Home Park career. The pair did not see eye-to-eye almost from day one, and Shilton was keen to realise the cash value in one of his most saleable assets to fund a recruitment campaign. In the end, it took Shilton 15 months to find a buyer for the big Plymothian, and it was off to Lancashire and Blackburn Rovers for a player who had firmly ensconced himself in the affections of the club's fans. It's noteworthy that despite enduring a frosty relationship with a manager keen to see the back of him, Morrison maintained his performance levels in a green shirt - even when asked to slot into midfield. A Rovers offer of £500,000 plus Wayne Burnett was deemed acceptable by Shilton, and Morrison was catapulted into the Premier League literally overnight. Sadly, Jock couldn't force his way into Blackburn's star-studded starting XI, and he was allowed to join Blackpool after just 19 months at Ewood Park. He later went on to play for Huddersfield Town and Manchester City - where he almost single-handedly hauled the club out of the third tier, becoming a cult hero in the process. He was later voted the third most popular captain in City's history by the club's fans, and was also inducted into Blackpool's Hall of Fame.

He wound down his career with loan spells at Crystal Palace and Sheffield United - for whom he made his last Football League appearances. In late 2002 he was given a trial at Bury, playing 45 minutes for the reserves but injury prevented him taking any further part. After his departure from Gigg Lane he retired from playing and became assistant manager to Andy Preece at Worcester City.

After four years with the club he resigned in April 2007, following a tumultuous end to his spell at St George's Lane. During a pre-season friendly against fierce local rivals Kidderminster Harriers in August 2006, an incident in the changing-room area caused the game to be abandoned after 71 minutes. Worcester announced the results of an internal enquiry into the incident and the club fined Morrison the maximum allowed under FA guidelines and suspended him for three games, warning him of his future conduct. The FA itself fined Morrison and also gave him a six-match touchline ban.

He continued to be part of Andy Preece's management team, however, working with him at Northwich Victoria before resigning from the club in January 2012. Preece was appointed Director of Football at Welsh Premier League side Airbus UK Broughton shortly after, with Morrison becoming assistant manager for the following three seasons.

In November 2015 Morrison was appointed Director of Football at Gap Connah's Quay in the Welsh Premier League.

Greens on Screen is run as a service to fellow supporters, in all good faith, without commercial or private gain.  I have no wish to abuse copyright regulations and apologise unreservedly if this occurs. If you own any of the material used on this site, and object to its inclusion, please get in touch using the 'Contact Us' button at the top of each page. Search facility powered by JRank Search Engine. Hover facility courtesy of Milonic. UK time at page load: 28 October 2021, 00:22.