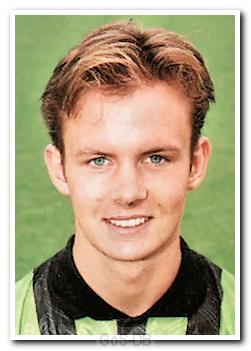 Much was expected of Jamie Morgan when he made the breakthrough into the first team from the Home Park youth ranks. A mature debut at the tender age of 17 away to Stoke in April 1993 suggested a fine future in the game for the central midfielder. But a serious ankle injury sustained in pre-season kept him out of first team contention for more than a year and, more importantly, stunted his development as a once promising talent. He returned to feature in the relegation season of 1994-95, but damaged his vulnerable ankle in a challenge with veteran Wycombe striker Cyrille Regis and his professional career was effectively over. Morgan tried his luck with Exeter City after being released by Neil Warnock in 1995, but was forced to hang up his boots on doctor's advice and drifted into the local non-league scene.

Greens on Screen is run as a service to fellow supporters, in all good faith, without commercial or private gain.  I have no wish to abuse copyright regulations and apologise unreservedly if this occurs. If you own any of the material used on this site, and object to its inclusion, please get in touch using the 'Contact Us' button at the top of each page. Search facility powered by JRank Search Engine. Hover facility courtesy of Milonic. UK time at page load: 09 December 2021, 07:08.