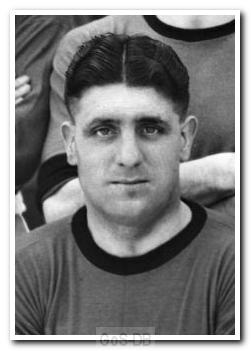 Originally from Westerhope on Tyneside, Mitcheson started out with Wolverhampton Wanderers, but made his League debut with Port Vale in 1933, playing 49 times in a two-year spell before being brought to Home Park by Bob Jack. He spent five seasons in Plymouth, clocking up over a century of appearances and averaging a goal every four games, including a hat-trick in January 1939 in a 3-4 away win at Luton Town. He left for Ipswich Town in the summer of 1939 and played in all three of their games before the outbreak of the Second World War interrupted the 1939-40 season. With Ipswich not playing in any of the war leagues he remained on their books until the cessation of hostilities, and then joined Yeovil & Petters United. He did return briefly to Home Park in 1948, working with training and ground staff, but made no further appearances for the club.

Greens on Screen is run as a service to fellow supporters, in all good faith, without commercial or private gain.  I have no wish to abuse copyright regulations and apologise unreservedly if this occurs. If you own any of the material used on this site, and object to its inclusion, please get in touch using the 'Contact Us' button at the top of each page. Search facility powered by JRank Search Engine. Hover facility courtesy of Milonic. UK time at page load: 17 May 2021, 17:56.