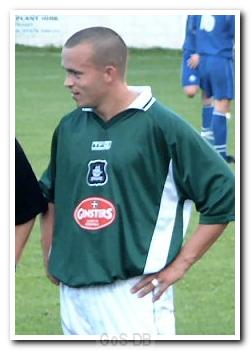 Milne started his career with Dundee, making his full debut at the tender age of 17 and was nicknamed Savo due to a striking similarity with former Aston Villa striker Savo Milosevic. He failed to break into the first team after his initial appearance and spent a season on loan at Forfar Athletic, where he scored 16 times in 35 games. After returning to Dundee he featured regularly over the next four years, but as often as not had to be content with substitute appearances.

After rejecting a new deal at financially-stricken Dundee, Milne moved to Argyle in 2004 but had a frustrating start when he suffered a serious knee injury after only substitute appearances and spent six months recovering. Despite playing twice to prove his fitness towards the end of the season he was allowed to leave on a free transfer and was snapped up by Owen Coyle at St Johnstone. A memorable brace in the shock 2-0 win over Rangers at Ibrox in the 2006 Scottish League Cup quarter-final was the highlight of six successful seasons with the Perth club. He dropped down to League One Ross County in January 2011 but seven years after signing for Argyle, he cut short an unhappy spell at County to go back to his roots with hometown club Dundee. He finished as top scorer in his first season back as the Dees finished second and returned to the Scottish Premier League on account of Rangers liquidation and demotion.

After a final season in the top tier, Milne spent a few months with League One Arbroath before embarking on a new career as a Police Officer in November 2013. He combined policing with a role as player-manager of Forfar Albion at junior level.

Greens on Screen is run as a service to fellow supporters, in all good faith, without commercial or private gain.  I have no wish to abuse copyright regulations and apologise unreservedly if this occurs. If you own any of the material used on this site, and object to its inclusion, please get in touch using the 'Contact Us' button at the top of each page. Search facility powered by JRank Search Engine. Hover facility courtesy of Milonic. UK time at page load: 07 May 2021, 14:15.