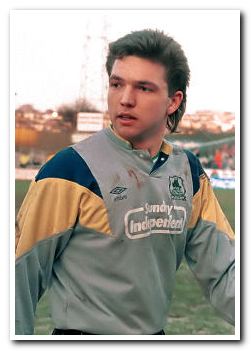 Came from: Arsenal   Went to: Arsenal

Miller will go down as a serious contender for the best ever loan player to grace Home Park after a sparkling 15-game spell for the club. The goalkeeper was brought to the Westcountry on loan from Arsenal in 1988, and was an instant hit. He was a big man with fantastic agility, solid handling skills and an amiable nature, but the presence of John Lukic and then David Seaman denied him the chance to establish himself at Highbury. Leaving Arsenal after six seasons, which included loan spells with West Bromwich Albion and Birmingham City, he joined Middlesbrough. Despite a promising start to his time there, Miller could not win a regular place in the first team and was loaned to Huddersfield Town, Grimsby Town and West Brom again. This last move led to a permanent transfer and he was virtually ever-present over the following three seasons at the Hawthorns. A back injury led to him losing his place and, eventually, to a transfer to Blackburn Rovers. He rarely played at Blackburn and after loan spells with Bristol City, Coventry City and St Johnstone his injury forced him to retire.

Greens on Screen is run as a service to fellow supporters, in all good faith, without commercial or private gain.  I have no wish to abuse copyright regulations and apologise unreservedly if this occurs. If you own any of the material used on this site, and object to its inclusion, please get in touch using the 'Contact Us' button at the top of each page. Search facility powered by JRank Search Engine. Hover facility courtesy of Milonic. UK time at page load: 29 November 2021, 20:23.