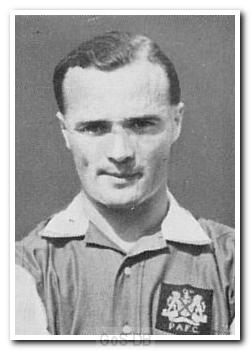 McShane began his career in his hometown with Belfast Celtic, and also had spells with Bangor and Brantwood in Northern Ireland before moving to Argyle following a successful trial. He made his Home Park debut (as did Jack 'Jumbo' Chisholm) on Christmas Eve 1949 against Chesterfield - a club 'Mac' later went on to manage.

The tough-tackling wing-half featured regularly in Argyles 1951-52 Division Three (South) Championship winning side. However, he was primarily used as a back-up and played twice as many games for the reserves as for the first team. After almost six years in Devon, he moved to Swindon Town in 1955 but called time on his Football League playing career after two seasons with the Robins. He became player-manager of Goole Town in the Midland League in 1957, before packing in playing a year later but sealing a return to Football League action to manage Second Division Scunthorpe United. Although McShane spent less than a year in charge of The Iron, it looks quite impressive when you consider that his successor spent just three days in the job.

He then moved back to the South West and worked as an FA coach. In the summer of 1960, he began helping out as Argyle reserve team trainer for a few months, while also running his own greengrocers in Callington. His final spell in management came at Fourth Division Chesterfield, where he spent five seasons between 1962 and 1967. McShane returned to the Plymouth area and became an accomplished and competitive single-figure golfer, and also wrote an occasional column for the Sunday Independent newspaper. He passed away in Plymouth on Christmas Eve 2012.

Greens on Screen is run as a service to fellow supporters, in all good faith, without commercial or private gain.  I have no wish to abuse copyright regulations and apologise unreservedly if this occurs. If you own any of the material used on this site, and object to its inclusion, please get in touch using the 'Contact Us' button at the top of each page. Search facility powered by JRank Search Engine. Hover facility courtesy of Milonic. UK time at page load: 28 November 2021, 09:14.