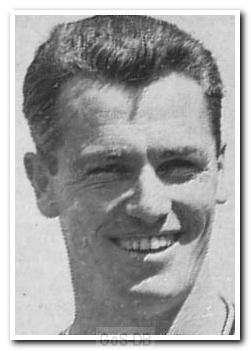 McParland began his career with Dundalk in the League of Ireland, although he was a native of Newry in Northern Ireland and won 34 caps for his country. He also starred in the 1958 World Cup, helping his country reach the quarter-final, scoring five goals in the tournament. He was spotted playing for Dundalk by Aston Villa and moved to England in 1952. In almost ten years at Villa Park he scored nearly 100 goals in just under 300 appearances and helped the club win the FA Cup in 1957. He was also instrumental in their Second Division title winning side of 1960 and scored in the second leg of the League Cup Final in 1961, helping Villa win the inaugural competition.

McParland left Villa Park in January 1962, joining local rivals Wolverhampton Wanderers, but only stayed a year before moving to Home Park. In his first half-season with Argyle he often played as a centre-forward, as opposed to his previous regular position on the wing, and he scored 11 goals in just 18 games. The following season proved to be more difficult however and McParland left Argyle, joining Worcester City of the Southern League. He went on to play for the Atlanta Chiefs in the North American Soccer League, and ended his career as player-manager of Glentoran.

Greens on Screen is run as a service to fellow supporters, in all good faith, without commercial or private gain.  I have no wish to abuse copyright regulations and apologise unreservedly if this occurs. If you own any of the material used on this site, and object to its inclusion, please get in touch using the 'Contact Us' button at the top of each page. Search facility powered by JRank Search Engine. Hover facility courtesy of Milonic. UK time at page load: 03 December 2021, 13:21.