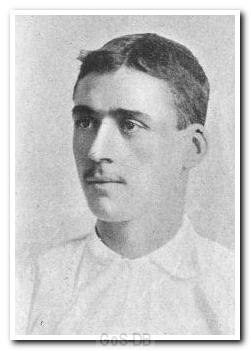 McLuckie was born in Glasgow on the first day of 1878 and played for junior side Jordanhill in his hometown before signing for Bury in 1898. In three years at Gigg Lane he made 94 appearances and scored 31 goals, including two in the 1900 FA Cup Final, helping Bury beat Southampton 4-0 at Crystal Palace.

In 1901 he signed for Aston Villa, where he continued to build a reputation as a fine centre-forward, appearing 62 times and netting an impressive 46 times over a three-year period. McLuckie's next move was to Home Park in May 1904, where he was a consistent performer throughout his only season with Argyle. He returned to Scotland to join Dundee in 1905 and then played for Third Lanark before moving to Hamilton Academical.

By the time he arrived at Hamilton's Douglas Park he was in the twilight of his career, but played a key role as an example to the club's younger players. He made eight Scottish League and Cup appearances for the club, scoring the first of his two goals on debut against Morton in December 1908.

By 1917 McLuckie had become a Sergeant with the Canadian Army, and following his discharge he resided, ironically, in another Hamilton - Ontario's variant. From there he moved to New York, where illness overtook him and an operation became necessary. This proved unsuccessful and sadly he passed away in hospital in 1923 at the age of 45.

Greens on Screen is run as a service to fellow supporters, in all good faith, without commercial or private gain.  I have no wish to abuse copyright regulations and apologise unreservedly if this occurs. If you own any of the material used on this site, and object to its inclusion, please get in touch using the 'Contact Us' button at the top of each page. Search facility powered by JRank Search Engine. Hover facility courtesy of Milonic. UK time at page load: 04 December 2021, 04:05.