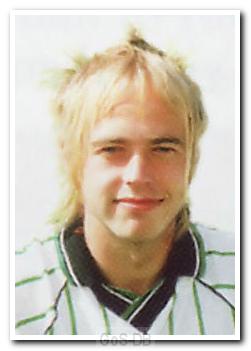 A product of the Nottingham Forest youth system, McGregor burst onto the scene during Forests 1995-96 UEFA Cup campaign, but his career did not progress from there and he had loan spells with Carlisle United and Preston North End before moving to Argyle. He scored 16 goals in his first season with the club, including two hat-tricks and was voted the club's player of the season. He could not maintain this form the following year however, and was allowed to move on a free transfer to Northampton Town. After two injury disrupted years at Northampton he chose to retire.

Greens on Screen is run as a service to fellow supporters, in all good faith, without commercial or private gain.  I have no wish to abuse copyright regulations and apologise unreservedly if this occurs. If you own any of the material used on this site, and object to its inclusion, please get in touch using the 'Contact Us' button at the top of each page. Search facility powered by JRank Search Engine. Hover facility courtesy of Milonic. UK time at page load: 03 December 2021, 13:00.