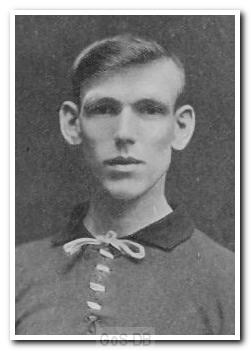 James McCormick was my grandfather. I noticed that he is not shown in the team after the match on 10 March 1909 until he reappears on 9 April 1909. The reason was that his wife, Lydia, was seriously ill and died in Rotherham, aged 24, on 21 March 1909. She was my dad's mother and he was only two and a half years old. My father was looked after by his paternal grandparents in Rotherham and this might also explain James McCormick's brief return to Sheffield United. As a young child I once asked my dad why his father left Sheffield United. Dad just said "He clocked the trainer". I don't know why, but I think my grandfather was known as a no nonsense type. There are reports in several newspapers in May 1915, in an Argyle game away against Norwich in April, of him having left the pitch and struck a Norwich supporter. I quote just one of them dated 4 May 1915:

Patriotic Footballer
James McCormick, right half of Plymouth Argyle F.C., summoned at Norwich Magistrates yesterday for assaulting a spectator during the game between Plymouth and Norwich City on April 17th, appeared in uniform as a sergeant of the 17th Middlesex Regiment.
McCormick pleaded provocation. He said that a section of the Norwich spectators "barracked" the Plymouth players. The complainant swore at him, and losing his temper, he (McCormick) rushed among the spectators and struck him. "I have left my family and joined the army" he said "and it was annoying to be insulted by men who do nothing for their country and are always at football matches".

The case was dismissed.

A good result we might say but as an ex Magistrate (what would he have said!) I have to say that the best he could have hoped for today would have been a conditional discharge.

Greens on Screen is run as a service to fellow supporters, in all good faith, without commercial or private gain.  I have no wish to abuse copyright regulations and apologise unreservedly if this occurs. If you own any of the material used on this site, and object to its inclusion, please get in touch using the 'Contact Us' button at the top of each page. Search facility powered by JRank Search Engine. Hover facility courtesy of Milonic. UK time at page load: 07 May 2021, 19:53.