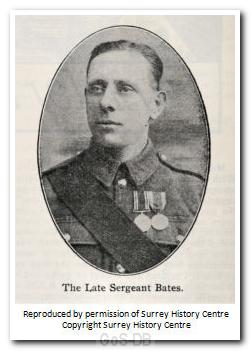 Bates made just one appearance for Argyle, in the first year of the First World War. Little was know about the player for over 100 years, with him listed as simply J. Bates from the Army, or even as R. Bates from the Royal Navy.

We now know that he was James Bates, born in Richmond in 1891. He was signed as an amateur by Argyle in October 1914, having been previously registered with Woolwich Arsenal (who had moved north of the river to Highbury the year before, and soon after changed their name to Arsenal Football Club). There is no evidence that he played for Arsenals first team, but he did play as an amateur for their reserve side in the South Eastern League between December 1912 and January 1913. There is also a suggestion that later in 1913 he played for Woolwich FC, who were an offshoot from Woolwich Arsenal and continued to play at The Manor Ground, Plumstead after the latter had moved to north London.

Whilst his Southern League registration with Argyle shows that he was previously on Woolwich Arsenals books, Bates at this time was a soldier in the British Army. He enlisted at the age of 17 in August 1909 and by 1914 had reached the rank of Sergeant in the 4th Battalion of the East Surrey Regiment, who at this time were stationed at South Raglan Barracks in Devonport. The East Surreys were well known for their sporting prowess, and a fortnight before his one game for the Pilgrims, Bates played at right-back for his regiment against Argyle Reserves. On the day before his first team appearance, the Western Daily Mercury reported that he was once again in the Regiments line-up for a second match against the Reserves. What happened then is not known, but 24 hours later he was at right-back for Argyles first team at Elm Park, Reading, with his transfer recorded in the Southern League ledger of October 1914. Argyle played poorly that day, losing 2-0, and in its report of a very one-sided game, the Reading Mercury said that the home side's left-winger dashed past Sergt. Bates and tested Horne with a terrific shot.

Sadly, Bates died when only 34, on 1 October 1925, just over ten years after his only game for Argyle. He was still serving with the East Surrey Regiment, at that time stationed in Jersey, and passed away in hospital after a serious operation from which he was at one stage making a good recovery. His death was much mourned by his Regiment and he was buried with full military honours.

Footnote: for more about discovering the background of Sergeant James Bates - see the 'Your Contribution' article below.

As the player profile suggests - very little was known about Bates for the century after that single game in 1914. The only book on PAFC's early history, W.S. Tonkin's "All About Argyle" published in 1963, listed him as R. Bates from the Royal Navy, but we now know this to be wrong.

More recent researches suggested that he had Army connections and that he was with the East Surrey Regiment (who were stationed locally). Attempts at identifying the player from the soldier had failed and in the end he was identified as a player, then a soldier, thanks to a local press clipping which listed him as part of an East Surrey Regimental football team as "Sgt. Bates (Woolwich Arsenal)".

This led Greens on Screen to contact http://www.thearsenalhistory.com and they identified him as having played games listed for both Woolwich Arsenal Reserves and Woolwich FC through local press archives.

This then led to a contact at the National Football Museum who checked their archive ledgers and ...  More

As the player profile suggests - very little was known about Bates for the century after that single game in 1914. The only book on PAFC's early history, W.S. Tonkin's "All About Argyle" published in 1963, listed him as R. Bates from the Royal Navy, but we now know this to be wrong.

More recent researches suggested that he had Army connections and that he was with the East Surrey Regiment (who were stationed locally). Attempts at identifying the player from the soldier had failed and in the end he was identified as a player, then a soldier, thanks to a local press clipping which listed him as part of an East Surrey Regimental football team as "Sgt. Bates (Woolwich Arsenal)".

This led Greens on Screen to contact http://www.thearsenalhistory.com and they identified him as having played games listed for both Woolwich Arsenal Reserves and Woolwich FC through local press archives.

This then led to a contact at the National Football Museum who checked their archive ledgers and established the registration of a Woolwich Arsenal squad player at the right time called James H Bates and confirmation of his move to / registration with Argyle in a rare Southern League ledger for the 1914-15 season.

This in turn led to one good 'hit' on a website searches when combining James H Bates with the East Surrey Regiment on the Lives of the First World War website, here: https://livesofthefirstworldwar.org/lifestory/239463

Through this process Greens on Screen had been in contact with Surrey History Centre in Woking who held some Regimental records for the East Surrey Regiment. Previous attempts at identifying "J. Bates" had come up with several candidates but nothing concrete. James H Bates however proved to crack the mystery once and for all and was able to be finally substantiated.

"Sergeant James Bates medal index card gives his full name as James Henry Bates, regimental number SR/1667, and he was awarded the Victory and the British War medal. No Star so his overseas service must have commenced after the end of 1915.

Sgt Bates re-enlisted in 1920 at Aldershot so we do have quite a bit of additional information. The main points given are James Henry Bates was born 14 March 1891 in Richmond and his former trade before enlistment was athlete. He was married and had three children but he sadly died on 1 October 1925 in Jersey. He was a small man, certainly by todays standards, 5ft 4 1/4in and 112 pounds, though he was still young, with grey eyes and brown hair.

A few notes on the 8th Battalion 1916-1919 and the 2nd Battalion 1920-1925, that might be of interest. We do not know when James transferred to the 8th Battalion, other than it was after 1915, but in 1916 the 8th Battalion served in the Battle of the Somme, going over the top on the first day, at Montauban. It was this battalion (appropriately enough) who famously crossed No Mans Land kicking two footballs, the idea of their Captain William Nevill to keep up the mens spirits, and distract them a little while advancing. Demobilization began in January 1919, with the last of the battalion arriving home in June.

James then re-enlisted in February 1920 just in time to travel with the battalion to Egypt from where he went on to Turkey to support Greek troops who were being sent to occupy parts of Turkey. After a few months back home they were sent to Dublin in January 1921. They spent a year there. The battalion left in February 1922. After a few years back at Aldershot the battalion left for three years garrison duty in Jersey in October 1924 where James died a year later. The quarterly Journal of the East Surrey Regiment reported:

"The death on 1st October of Sgt. Bates created gloom throughout the battalion. During his time in hospital his condition had at first given rise to a considerable anxiety on his behalf. His progress was satisfactory, however, and it was hoped that he was well on the road to recovery. The end came with great suddenness.

It would require an abler pen than mine to eulogise adequately one of the best all-round sportsmen in the Regiment. His general popularity was amply demonstrated by the number of mourners who attended the funeral. Full military honours were accorded. Sgt. Bates leaves a widow and two very young daughters and to them we extend our heartfelt sympathy".

The Journal also noted: news of his death was made the more sad in view of the splendid recovery he was making after a serious operation, although there is no indication of what the operation was for."

So after years of merely trying to find out Bates' first-name we unravelled far more in trying to ascertain it.

Acknowledgements: with sincere thanks to:

Who all, in collaboration, helped unlock this century old mystery!

Greens on Screen is run as a service to fellow supporters, in all good faith, without commercial or private gain.  I have no wish to abuse copyright regulations and apologise unreservedly if this occurs. If you own any of the material used on this site, and object to its inclusion, please get in touch using the 'Contact Us' button at the top of each page. Search facility powered by JRank Search Engine. Hover facility courtesy of Milonic. UK time at page load: 27 May 2022, 19:31.