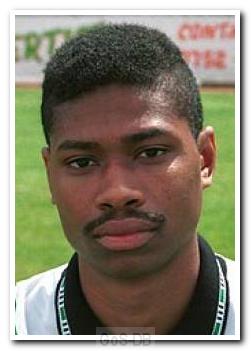 Trying to find a goalscorer out of a non-existent budget was the considerable challenge facing manager David Kemp in the summer of 1991. It had been 12 months since the peerless Tommy Tynan had moved to Torquay, and big Robbie Turner was the only player at the club who had anything like a goal-scoring record. Enter a nippy little forward from non-league Grays Athletic.

Dwight Marshall had moved to England from Jamaica as a boy and, despite considerable promise as a schoolboy footballer, had been encouraged to concentrate on his education by his parents. An office job in London was combined with Saturdays playing non-league football; Marshall played for Hampton (prior to their merger with Richmond) and then Leyton Wingate before joining Grays. Nevertheless he persevered with his dream to make it in the professional game. Failed trials at Sheffield United and Crystal Palace looked to have dashed his hopes, but Palace coach Wally Downes recommended him to Kemp  who decided to sign the 25-year-old just ten minutes into a pre-season friendly in St Austell.

Marshall was a revelation in his debut season in League football. He may only have scored 14 goals  hardly Tynan-esque  but his pace, skill and personality endeared him to Argyle fans in a way that few other players have managed before or since. Sadly his goals failed to save Kemp's job or Argyle's second-tier status, and Marshall went on to endure a frustrating first season under new boss Peter Shilton in 1992-93. Struggling with injury and illness, Marshall was eventually shipped out on loan to Premier League Middlesbrough. Boro boss Lennie Lawrence was keen to make the transfer permanent, but the Teesside club were broke and Marshall ended up returning to Plymouth.

Finally given an extended run in Shilton's team in his preferred position up front, Marshall found the net 15 times in the play-off season of 1993-94. His penchant for spectacular strikes was highlighted against Port Vale  when he tapped the ball around the keeper and ran around him to slot home  and in the FA Cup against Barnsley, when he cut in from the right before sending a curling shot into the far corner.

Argyle's unsuccessful play-off challenge left Marshall with no choice but to consider his future  he was by then 28 years old with only three seasons of League football behind him. The Green Army were dismayed but sympathetic when Marshall decided to sign for First Division Luton Town in the summer of 1994. He became almost as popular at Kenilworth Road as he had been at Home Park, but struggled with injuries and eventually ended up back at Home Park  where he again topped the scoring charts in 1998-99 at the grand old age of 33.

Marshall was released in 1999, and he went on to see out his career with non-league clubs in the London area, including Kingstonian (and a return to Luton for an FA Cup game), Slough Town, Aylesbury, Boreham Wood, a return to one of his earlier clubs Leyton Pennant (as Leyton Wingate had become) and then Enfield.

After hanging up his boots Marshall went on to become a human resources manager for a North London college. In 2009 he returned to Home Park as a guest, and was given a rapturous reception by the crowd that confirmed his status as one of the most popular players ever to pull on a green shirt.

Greens on Screen is run as a service to fellow supporters, in all good faith, without commercial or private gain.  I have no wish to abuse copyright regulations and apologise unreservedly if this occurs. If you own any of the material used on this site, and object to its inclusion, please get in touch using the 'Contact Us' button at the top of each page. Search facility powered by JRank Search Engine. Hover facility courtesy of Milonic. UK time at page load: 04 July 2022, 09:53.