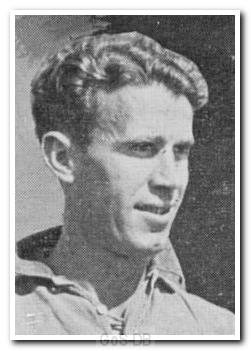 Machin began his professional career with Chelsea, joining the club towards the end of the war after serving with the Royal Hampshire Regiment, and played over 60 games in four years there. He was signed by Argyle as a forward but it took a move to wing-half for him to break into the team on a regular basis. A broken leg suffered at the end of the 1948-49 season kept him out for over a year and despite playing a few games after regaining his fitness, he could not win back his place in the team. After leaving Argyle he played for St Austell before moving into management in local non-league football.

Greens on Screen is run as a service to fellow supporters, in all good faith, without commercial or private gain.  I have no wish to abuse copyright regulations and apologise unreservedly if this occurs. If you own any of the material used on this site, and object to its inclusion, please get in touch using the 'Contact Us' button at the top of each page. Search facility powered by JRank Search Engine. Hover facility courtesy of Milonic. UK time at page load: 07 May 2021, 07:51.