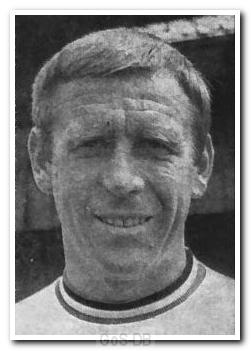 Born in Oldham, Lord began his football journey as a youth at Rochdale, where he spent seven years and scored 54 goals in 122 League games. He moved on to Crewe Alexandra in 1961, scoring an even more impressive 68 in 108 League appearances, including four hat-tricks in his first season and a total of eight in his time there, a club record that still stands.

In November 1963 Lord's achievements in the lower divisions persuaded manager Andy Beattie to bring the 27-year-old to Home Park, where he became the Pilgrims' leading goal-scorer in his first season, albeit with just eight goals. The following season, with Malcolm Allison in charge, Lord repeated the feat jointly with Mike Trebilcock, each scoring 17 times, although their styles could not have been more contrasting - whilst Trebilcock was lively and agile, the bustling Lord relied on his muscular physique and power in the air to upset defences. Amongst those 17 goals that season were an impressive six in as many games in Argyle's run to the semi-finals of the Football League Cup in 1965.

With Derek Ufton in charge for the following season, Lord gradually fell out of favour and in February 1966 he dropped two divisions to sign for Stockport County. Another remarkable strike rate of 18 goals in 27 games saw him move quickly back to the second tier with Blackburn Rovers, but with just a single goal in ten games, he was sold on to Chesterfield in the summer of 1967, where he quickly gained a reputation as an inspiring and strong-minded coach.

With Derek Ufton still in charge at Home Park, Argyle's form had plummeted and there were angry calls for the manager to go. The Argyle board saw Frank Lord as the answer, but as a coach and number-two to the manager, and after an initial attempt to bring him back had failed, chairman Clifford Crookes finally got his man in October 1967, within hours of a heavy home defeat to Hull City that had left the club in the second division's bottom place. Lord, who called for "101% effort" from the players, was signed on a two-year contract as a player-coach.

It was the coaching side that took all his time that season, but it wasn't enough to improve Argyle's poor form. With only two wins in the next 12 games, Derek Ufton was sacked at the end of January 1968 and Lord was appointed in the caretaker role, just three months after his return to the club. Lord's time in charge was short: just 14 days in which six goals were shipped in two more defeats.

The new boss, Northern Ireland international manager Billy Bingham, was one of the new breed of 'tracksuit managers' and there was initial speculation that Lord would have no further place at the club. However, despite the almost inevitable relegation at the end of the campaign, Bingham was happy for Lord to see out his contract and he even played a few games to help his charges achieve a respectable fifth place in the third tier that following season.

After his second spell with Argyle, Lord retired from playing. He went on to coach at Crystal Palace and Preston North End, where he also served as caretaker-manager in 1973. He then moved to South Africa and managed Cape Town City for several years, winning the Manager of the Year award in 1977 before returning to the UK to become Hereford Uniteds manager from December 1979 to September 1982. Moving abroad again, he was head coach of the Malaysia national team from 1983 to 1985, and also applied unsuccessfully for the vacant manager's position at Argyle during that time. After a spell out of the game, in 1994 he became assistant manager at Lincoln City and then joined Wigan Athletic as a football co-ordinator and was also briefly caretaker manager at Springfield Park in 1995.

Returning to South Africa and settling back in Cape Town, he later worked as a scout for Manchester United. Frank died of a heart attack at his home in June 2005.

Frank then went on to manage Cape Town in South Africa.

Frank had a number of unorthodox moves which endeared him to the Home Park crowd. I can remember him throwing the ball against the back of retreating opposition players to gain possession from a throw-in at a number of matches. When Argyle was winning he would often station himself in the dying minutes of a game beside the opposition's goalposts, beckoning his team to send him the ball and, presumably, drawing the referee's attention that he was off-side and that a free kick should be awarded from where he was standing. I expect he would get booked today for both tactics.

Some goals are memorable and stick in the mind - my only recollection of Frank, who became my favourite player - I was only 9 or 10 at the time - was of a fabulous goal he scored soon after joining us. Sat Dec 28 1963, home to Southampton, drew 1-1 with Frank scoring with a waist-high volley from the edge of the area. What a cracking goal, I remember it as if it was yesterday!

August 1964 remains a classic period in my sporting history... and Frank Lord's goal for Argyle against Cardiff City remains high in the memory. I went on to cover soccer for TODAY, The News of the World and The Sun, and can scarcely recall a better moment than when his shot hit the back of the net. I was an 11-year-old Argyle 'fanatic', watching only his fourth game at Home Park. On a family holiday in Plymouth, I had watched a disappointing midweek goalless draw with Huddersfield Town and pleaded with my dad for us to stay on and watch The Greens again on the Saturday. They didn't ...  More

August 1964 remains a classic period in my sporting history... and Frank Lord's goal for Argyle against Cardiff City remains high in the memory. I went on to cover soccer for TODAY, The News of the World and The Sun, and can scarcely recall a better moment than when his shot hit the back of the net. I was an 11-year-old Argyle 'fanatic', watching only his fourth game at Home Park. On a family holiday in Plymouth, I had watched a disappointing midweek goalless draw with Huddersfield Town and pleaded with my dad for us to stay on and watch The Greens again on the Saturday. They didn't disappoint, with Lord scoring a great goal almost from the kick-off. Stood behind the Barn Park End goal, I was mesmerized as the tough centre-forward took possession, slipped a couple of tackles and ran on to slot the ball home past the advancing Bluebirds' keeper. As Frank prepared to shoot it was as though time stood still, as I tightly crossed my fingers and dared to hope he would put Argyle ahead. I needn't have worried. Years later whilst working for TODAY I had the opportunity to recall the incident with Frank himself. He remembered it well, but I'll wager that his goal that day meant more to me than it did to him! After all, he did score one or two more.

Greens on Screen is run as a service to fellow supporters, in all good faith, without commercial or private gain.  I have no wish to abuse copyright regulations and apologise unreservedly if this occurs. If you own any of the material used on this site, and object to its inclusion, please get in touch using the 'Contact Us' button at the top of each page. Search facility powered by JRank Search Engine. Hover facility courtesy of Milonic. UK time at page load: 04 July 2022, 10:10.