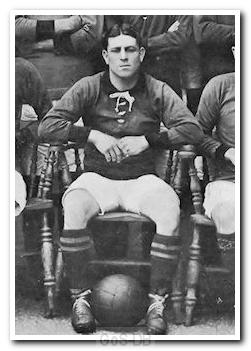 Barton was a half-back who joined Argyle from Fulham in 1910. The London club had joined the Football League in 1907 after winning the Southern League in 1905/06 and 1906/07, and Barton was pictured in Fulham's 1908-09 team photo along with former Pilgrim Robert Dalrymple and future Pilgrim Dick Prout. A Fulham 'double header' programme from 23rd January 1909, when the first team played Birmingham City and their reserves took on West Ham United, describes the club's "tricky reserve" as a talented amateur boxer, having recently taken part in an exhibition bout at Cromwell Hall, Putney. The programme notes go on to mention "he has done well as a centre-forward for Fulham Reserves but it is thought may do still better as a half-back." Southern League appearances are not recorded but Barton had not played for Fulham in the Football League by the time he joined Argyle in the summer of 1910, although he had clearly been a regular for The Cottagers' reserves.

Barton played several times for Argyle's reserves as a half-back - as Fulham had envisaged - and vied for the spot with Albert Hosking, who also made a single first team appearance in that position, and to a lesser extent Arthur Holden, although the latter went on to make over a century of appearances for the club. With John Boden also arriving from Croydon Common and Robert Jack also signing Jimmy McCormick, it was the end of the road for Messrs Barton and Hosking at Argyle. Barton had made just a single first team appearance for Argyle and left the club by the end of that year, returning to London with Queens Park Rangers. He is listed as part of Queens Park Rangers' Southern League squad in 1911/12 and 1912/13 but no first team appearances are recorded.

William (bill barton) was my great grandad. any info would be greatly appreicated

Greens on Screen is run as a service to fellow supporters, in all good faith, without commercial or private gain.  I have no wish to abuse copyright regulations and apologise unreservedly if this occurs. If you own any of the material used on this site, and object to its inclusion, please get in touch using the 'Contact Us' button at the top of each page. Search facility powered by JRank Search Engine. Hover facility courtesy of Milonic. UK time at page load: 19 June 2021, 02:07.