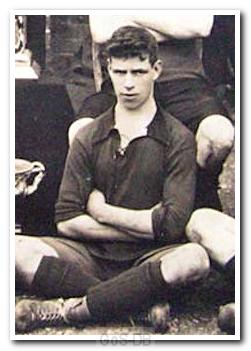 Came from: Army   Went to: Army

Private Jennings was a soldier in the 2nd Battalion, The Sherwood Foresters (Nottinghamshire and Derbyshire Regiment), which was stationed at Crownhill Barracks - just north of Plymouth at that time - between 1910 and 1913. He played at inside-left in the 2nd Battalion's side that won the Army Cup in April 1911, and alongside him in the final at Aldershot was winger Bertie Bowler, both players scoring in a 3-1 win. The victorious side are commemorated in a team photo entitled 'The Regimental Football Team 2nd Battalion Winners Army Cup, 1911' held by the Regiment's Museum, in which Jennings and Bowler sit next to each other.

Later that year, Bowler left the Army to join Argyle, but Jennings continued with the Sherwood Foresters, who won the Army Cup again in April 1912; this time their opponents were 4th Battalion Middlesex Regiment, who were based in Devonport, so the final was played in front of around 15,000 at Home Park, with Jennings scoring a hat-trick in a 5-1 win. The Western Morning News reported: "Coming to a comparison between the forwards, Jennings stood out alone. He was really brilliant."

As well as their success in the Army Cup, the Sherwood Foresters also played regular football in the Plymouth & District League, including fixtures against Argyle Reserves, until the battalion was redeployed to Sheffield in the autumn of 1913. Whether Jennings went with them is not known; perhaps he stayed in the Plymouth area because 18 months later he made his only appearance for Argyle, a 1-0 defeat to Northampton Town at Home Park in one of the last Football League games to be played for four years.

Good evening. I am taking advantage of the lockdown to advance a project I have had in mind for a while now - that is, to produce a complete list of all SL games form 1894 to 1920 including all team lineups scorers refs, attendances etc. Your website has been an amazing resource. Hopefully I can add to you total knowledge by pointing you in the direction of a match report in The Sportsman newspaper for the match on 20th March 1915 between Plymouth and Northampton Town at Home Park. In it, Edward Jennings is described as Private Jennings so it would seem he remained in the military, or at least re-enlisted, whilst he still resided in the Plymouth area.

I can provide a "screen grab" of the report but I am not sure how to do that within the confines of this email!

Greens on Screen is run as a service to fellow supporters, in all good faith, without commercial or private gain.  I have no wish to abuse copyright regulations and apologise unreservedly if this occurs. If you own any of the material used on this site, and object to its inclusion, please get in touch using the 'Contact Us' button at the top of each page. Search facility powered by JRank Search Engine. Hover facility courtesy of Milonic. UK time at page load: 18 June 2021, 16:25.