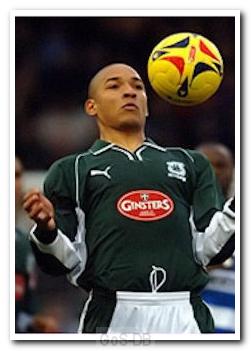 Jarrett started his career at Blackpool, moving on to Wrexham when he could not break into the first team. After a year, and just one appearance there, he signed for Bury, where his career took off. Despite the club being relegated, his form led to a transfer to Wigan Athletic, who he helped win the Second Division. A broken leg meant he lost his place in the team and he had a brief spell on loan with Stoke City. When his Wigan contract expired he rejected a new deal, choosing instead to sign for Norwich City. Unable to win a regular place in the starting line-up, Jarrett joined Argyle on a six-week loan, again signing for Tony Pulis who had managed him at Stoke. He did well in his short spell in the Argyle midfield but any hopes for a loan extension, or permanent transfer, were ended by an injury crisis at Norwich.

Ironically, Jarrett's first league game back for Norwich was at Home Park against Argyle. Two months later he joined Preston North End on loan, a move made permanent at the end of the season. He rarely played for Preston over the next three seasons and later revealed that he had suffered from severe depression at that time. After short loan spells with Hull City, Leicester City, Queens Park Rangers and Oldham Athletic, he was released by PNE and signed for Brighton and Hove Albion. He then had spells with Port Vale and Oldham Athletic before moving into non-league football with FC Halifax Town, Welsh side Airbus UK Broughton, and Chester.

Jarrett took an FA refereeing course in 2013 at the Lancashire FA, and continued to play semi-professional football whilst gaining experience as a referee on Sunday mornings in the Lancashire Sunday Football League. In June 2014 he signed for Salford City and helped the Ammies win the Northern Premier League Division One North title, but at the end of that season he hung up his playing boots to concentrate on his refereeing career.

Greens on Screen is run as a service to fellow supporters, in all good faith, without commercial or private gain.  I have no wish to abuse copyright regulations and apologise unreservedly if this occurs. If you own any of the material used on this site, and object to its inclusion, please get in touch using the 'Contact Us' button at the top of each page. Search facility powered by JRank Search Engine. Hover facility courtesy of Milonic. UK time at page load: 29 November 2021, 20:33.