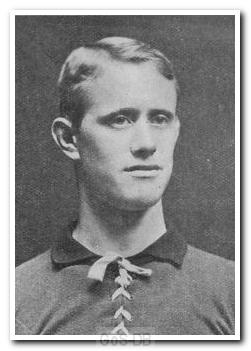 Plymouth-born Horne served in South Africa with the Duke of Cornwall's Light Infantry, for whom he also played football, before returning to make a name for himself in local football. A goalkeeper, he played for Tavistock and Essa, and then joined Argyle on amateur terms in January 1904. Signing a professional contract two months later, he made three appearances as understudy to Jack Robinson that season.

Ironically known as 'Tich' due to his size, Horne became the first-choice 'keeper for the next campaign but eventually lost his place following the arrival of England international John Sutcliffe. Other than a year spent with Fulham in 1906-07, Horne served as back-up to Sutcliffe for a further five seasons. During this time he was greatly in demand from other clubs but remained loyal to his home town and was rewarded when he took over as Argyle's number one in 1911.

The Argyle handbook of 1913-14 states that he "carries his 15 stone with the agility of a 3-year-old and none can tell us of a more reliable custodian. His record proves him the best in the United Kingdom". He remained the first choice until the 1914-15 season after which his career was interrupted by the outbreak of war. Despite still being on Argyle's books until 1920, he did not play again after hostilities ended and eventually retired due to ill health.

Greens on Screen is run as a service to fellow supporters, in all good faith, without commercial or private gain.  I have no wish to abuse copyright regulations and apologise unreservedly if this occurs. If you own any of the material used on this site, and object to its inclusion, please get in touch using the 'Contact Us' button at the top of each page. Search facility powered by JRank Search Engine. Hover facility courtesy of Milonic. UK time at page load: 18 June 2021, 15:45.