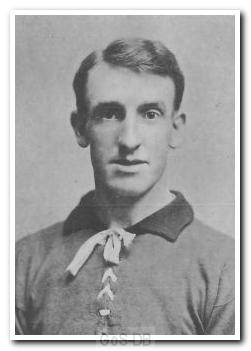 Holden was born in Billingshurst, Sussex in 1882. He began his career with Portsmouth before joining Southend United. In 1907 he moved to Home Park and was a fixture in the team at outside-left over the next two years. The club handbook described him as "fast, dashing and noted for accurate centring". In April 1909 he left Argyle to sign for Chelsea, where he made 20 appearances and scored once during his single season with the club.

In September 1910 he returned to Plymouth, immediately regaining his place on the wing and recapturing his previous good form. However, he lost his place in the side during the 1911-12 campaign and left the club at the end of the season, returning to Southend United where he ended his career.

Greens on Screen is run as a service to fellow supporters, in all good faith, without commercial or private gain.  I have no wish to abuse copyright regulations and apologise unreservedly if this occurs. If you own any of the material used on this site, and object to its inclusion, please get in touch using the 'Contact Us' button at the top of each page. Search facility powered by JRank Search Engine. Hover facility courtesy of Milonic. UK time at page load: 19 June 2021, 01:27.