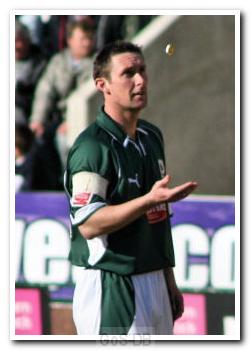 2. Came from: Reading   Went to: Released

Lee Hodges was the very epitome of an unsung hero.

Initially borrowed from Tottenham Hotspur in 1993 as a rookie striker with a big future, Hodges failed to live up to his early promise and ended up at Reading following a successful spell with Barnet. Severe injury problems curtailed his progress with the Royals, and Paul Sturrock eventually brought him back to Home Park eight years after his six-match cameo under Peter Shilton.

In Argyle's subsequent rise up through the divisions under Sturrock, there was a large ensemble of stars: Friio, Norris, Coughlan, Larrieu, Wotton..., all box-office hits in a side that swept the board in the Scotsman's hugely successful first spell at the club. But the anchor that ensured Sturrock's ship remained on an almost permanently even keel was undoubtedly the peerless Hodges. More versatile than a Swiss Army knife, Hodges was the multi-shaped peg that Sturrock used to fill a number of holes in his all-conquering side.

Initially deployed on the left side of midfield, Hodges ended up replacing Brian McGlinchey at left-back when the Irishman sustained a broken leg. He also turned up in the centre of midfield, back in his original position up front, and even briefly at centre-back. But Argyle's Jack of all trades was far from being a master of none, and his metronomic consistency was hugely integral to the title wins of 2001-02 and 2003-04.

A bothersome back injury ensured Hodges would miss most of Argyle's first season back in the second tier of English football in 12 years, and it was perhaps no coincidence that the side struggled as a result. On his return to full fitness he duly forced his way into the plans of such managerial luminaries as Tony Pulis and Ian Holloway, and for three seasons was as dependable in the second tier as he had been in the third and fourth.

But Mother Nature catches up with even the most dogged of servants, and Hodges was eventually released in the summer of 2008, shortly before his 35th birthday, leaving Home Park with two divisional winners' medals and the grateful thanks of the Green Army.

He stayed in the South West for the remainder of his playing career, helping Torquay United back into the Football League and later taking part in Truro City's rise up the pyramid as both player and manager. After guiding the cash-strapped Cornish club through the 201213 season, during which City nearly folded, Hodges was let go for financial reasons.

In January 2014 he was appointed assistant manager at Torquay as part of a triumvirate of ex-Argyle players with manager Chris Hargreaves and coach Ken Veysey. However, in June 2015, following the takeover of Torquay by a new consortium, Hodges, Hargreaves, and Veysey were placed on 'gardening leave' after turning down a significant pay cut. Their exits from the club were confirmed just two days later.

In January 2016 Hodges returned to Home Park as a development coach within Argyle Community Trust, working with 16 to 18-year-olds in the club's expanding education programme.

Greens on Screen is run as a service to fellow supporters, in all good faith, without commercial or private gain.  I have no wish to abuse copyright regulations and apologise unreservedly if this occurs. If you own any of the material used on this site, and object to its inclusion, please get in touch using the 'Contact Us' button at the top of each page. Search facility powered by JRank Search Engine. Hover facility courtesy of Milonic. UK time at page load: 04 July 2022, 11:04.