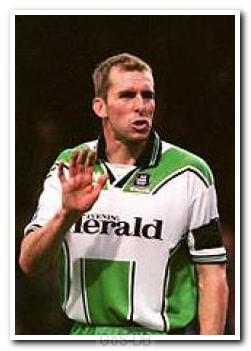 In his six seasons at Home Park, 'Hoof' was a rock at the centre of Argyle's defence and captained the side to victory in the Division Three play-off final at Wembley. He began his career with Sunderland who, 14 years later, provided the opposition for his testimonial at Home Park. He spent three years at Roker Park but only played a few games, going on loan to Halifax Town and York City whilst there. After being released by Sunderland he joined Shrewsbury Town and spent two seasons there before a move to Cambridge United. Neil Warnock had managed Huddersfield Town against Cambridge at the end of the 1994-95 season and was so impressed by Heathcote's performance that he told him he would sign him for whichever club he was managing the following season.

After arriving at Home Park and after some protracted negotiations, Warnock achieved his promise and Mick became the foundation of the team for the next five years. He was named as the club's player of the year in both 1995-96 and 1998-99. A back injury restricted his appearances over the last 18 months of his contract, and he looked set to be released. However, after regaining his fitness he was given the chance to earn a new contract by Paul Sturrock, which he did during the pre-season. Just days after his testimonial game though, and with a one-year contract on offer from Argyle, he chose to return to Shrewsbury who had offered a two-year deal. He was released after 18 months and went on to play for Colwyn Bay, Leek Town and Hucknall Town.

Greens on Screen is run as a service to fellow supporters, in all good faith, without commercial or private gain.  I have no wish to abuse copyright regulations and apologise unreservedly if this occurs. If you own any of the material used on this site, and object to its inclusion, please get in touch using the 'Contact Us' button at the top of each page. Search facility powered by JRank Search Engine. Hover facility courtesy of Milonic. UK time at page load: 03 December 2021, 12:56.