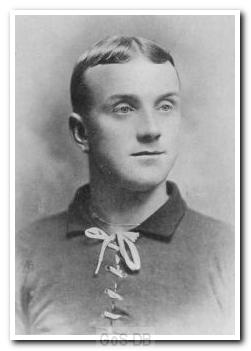 Hakin was born in Mexborough in 1882 and began his career with local side Mexborough Town. In 1906 he signed for Grimsby Town and made 58 appearances at inside-left over the next two years, scoring 16 goals. In the summer of 1908 he moved to Home Park, the club handbook memorably describing him as "not very tall but built like a castle, is absolutely fearless and has a penchant for worrying goalkeepers".

Hakin had a good goalscoring record, including a hat-trick against Exeter City, but spent just one season at Home Park because he turned down a contract offer from the club, choosing instead to sign for Portsmouth. He also went on to play for Rotherham County.

Greens on Screen is run as a service to fellow supporters, in all good faith, without commercial or private gain.  I have no wish to abuse copyright regulations and apologise unreservedly if this occurs. If you own any of the material used on this site, and object to its inclusion, please get in touch using the 'Contact Us' button at the top of each page. Search facility powered by JRank Search Engine. Hover facility courtesy of Milonic. UK time at page load: 17 May 2021, 17:14.