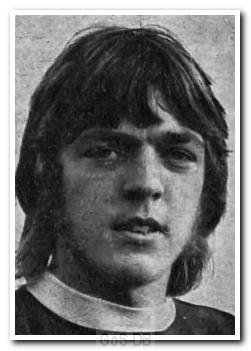 Yorkshireman Hague began his career with his local side, Rotherham United, and played nearly 150 games in his four years with the club. He was an extremely versatile player and appeared at almost every position in the team, also winning England youth caps.

He moved to Home Park in November 1971, just 24 hours after scoring the winner in a 4-3 Rotherham victory over Argyle. He immediately made his mark in the centre of defence but was also a goal threat, especially at set-pieces. Hague finished his first full season with Argyle as second top scorer and won the Player of the Year award. Other than when injured at the start of the 1973-74 season, he was virtually ever present during his time at Home Park, but despite this, was sold to Bournemouth after less than three years with the club.

After two productive seasons with the Cherries he spent a single campaign with Huddersfield Town before ending his career in England with two years at Darlington. Hague then moved to the United States to play for his former teammate at Bournemouth, Harry Redknapp, at Phoenix Fire, and also went on to play in Columbus and Los Angeles.

Greens on Screen is run as a service to fellow supporters, in all good faith, without commercial or private gain.  I have no wish to abuse copyright regulations and apologise unreservedly if this occurs. If you own any of the material used on this site, and object to its inclusion, please get in touch using the 'Contact Us' button at the top of each page. Search facility powered by JRank Search Engine. Hover facility courtesy of Milonic. UK time at page load: 23 January 2022, 08:51.