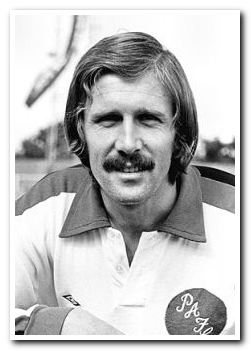 The Carlisle born centre-half started his career with his hometown club after coming through the youth ranks, signing professional terms in 1964 but making only two appearances for the Cumbrians before moving to Gillingham four years later. This proved to be a prudent move as he established himself with the Kent side, making 132 appearances, scoring 24 times in a three-year spell. He then moved to Bristol Rovers in July 1971 and was made captain of the Eastville side, going on to play 77 times and score twice in a three year spell.

In July 1974, Tony Waiters paid £19,000 to ensure he was Green by name and Green by nature. He went on to clock up over a century of appearances in a three-season spell and will be long remembered as Waiters' captain in the 1974-75 promotion season, when he played in every League, FA and League Cup game.

After sharing duties with John Craven in 1976-77, he left Home Park in March '77 to become player-manager at Fourth Division Torquay United, where he worked with the experienced Frank O'Farrell, the Gulls' general manager. Green playing 88 times before hanging up his Plainmoor boots in May 1979 to concentrate on managing his team, and the following season he declined an offer to move up two divisions to take the reins at Bristol Rovers.

In May 1981, with Torquay in financial difficulties at the end of a disappointing season, Green was dismissed and O'Farrell took over as team manager for the third time. It was the ex-Pilgrim's final involvement in League football, although he did go on to play locally for Newton Abbot and Hele Rovers.

Greens on Screen is run as a service to fellow supporters, in all good faith, without commercial or private gain.  I have no wish to abuse copyright regulations and apologise unreservedly if this occurs. If you own any of the material used on this site, and object to its inclusion, please get in touch using the 'Contact Us' button at the top of each page. Search facility powered by JRank Search Engine. Hover facility courtesy of Milonic. UK time at page load: 25 July 2021, 01:34.