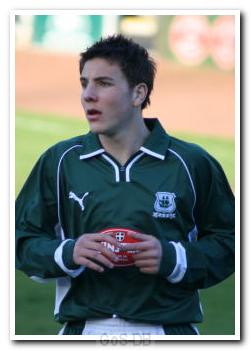 Came from: Trainee   Went to: Everton

A product of Argyle's youth system, Gosling made his first team debut at the age of 16 and represented England at youth level. The talented midfielder broke into the first team squad after he was included on the pre-season tour to Austria, where he made a substitute appearance against Fabio Capello's Real Madrid. Despite playing less than 25 first team games at Home Park, Gosling moved to Everton in January 2008 for a fee with add-ons that could have risen to £2 million.

Gosling scored an FA cup replay winning goal for the Toffees against Merseyside rivals Liverpool, which was famously missed by the live TV coverage when they prematurely switched to an advert break. Despite declaring undying love for Everton, Gosling signed a four-year deal with Newcastle United in July 2010, taking advantage of a contract loophole to sign as a Bosman free agent. At a time of growing financial difficulty at Home Park, this was particularly irksome for Argyle, who were due a tidy sum on any sale.

Gosling suffered with injuries in the North East and, as a result, struggled to live up to his promise as a youngster and ultimately made only five Premier League starts in four seasons with the Magpies. He did impress though from October 2013 on a three-month loan spell in the Championship with Blackpool, and following his release from Newcastle, Eddie Howe had no hesitation in making him first summer signing back on the South Coast with ambitious AFC Bournemouth on a four-year deal.

In his first season at Bournemouth, Gosling made 24 appearances and scored five goals in a campaign that ended in promotion to the Premier League. His form continued in 2015-16 and was named the 'Marathon Man' of the Premier League that season, averaging 11.98 km per 90 minutes of play, with an astonishing 13.8 km (8.6 miles) in a game against Sunderland in September 2015.

In July 2017, having chalked up 12 goals in 91 midfield appearances over three seasons, Gosling committed to a new four-year contract with Bournemouth.

Greens on Screen is run as a service to fellow supporters, in all good faith, without commercial or private gain.  I have no wish to abuse copyright regulations and apologise unreservedly if this occurs. If you own any of the material used on this site, and object to its inclusion, please get in touch using the 'Contact Us' button at the top of each page. Search facility powered by JRank Search Engine. Hover facility courtesy of Milonic. UK time at page load: 23 January 2022, 10:00.