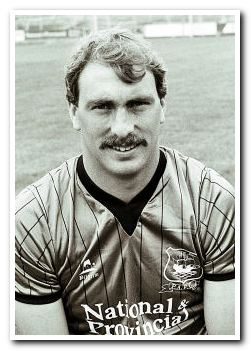 Born in Luton, Goodyear started his career with Luton Town, making 90 appearances in three seasons before joining Argyle in 1984. He clocked up just over a century of games in Argyle's defence before moving to top-flight Wimbledon in 1987. Whilst never a first team regular at Plough Lane - he made just 26 appearances in three seasons - Goodyear did start the Dons' famous 1988 FA Cup Final win over Liverpool. After moving to Brentford in 1990, he finished his career in Hong Kong with Ernest Borel FC. Perhaps prompted by the serious knee injury which ended his career, Goodyear studied physiotherapy and returned to Luton Town as their physio in 1993, and subsquently performed the same role for Cardiff City and Chester City.

Greens on Screen is run as a service to fellow supporters, in all good faith, without commercial or private gain.  I have no wish to abuse copyright regulations and apologise unreservedly if this occurs. If you own any of the material used on this site, and object to its inclusion, please get in touch using the 'Contact Us' button at the top of each page. Search facility powered by JRank Search Engine. Hover facility courtesy of Milonic. UK time at page load: 23 January 2022, 10:04.