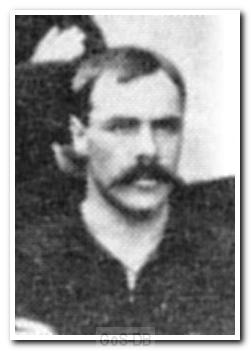 Note: One record book says that the second goal against West Ham on 19th Sep 1903 was scored by Peddie, but the match report in the Western Morning News clearly describes the second goal as a free-kick (penalty) scored by Goodall after Peddie had been brought down. The goals-scored totals for each player are therefore different from at least one source.

Goodall was born in Belfast in 1864 but raised in Scotland, his father's job as a soldier causing the family to move often. His brother John, also a professional footballer, was born in London, and the two subsequently became the first brothers to represent different countries.

Archie began his career on Merseyside, playing for Liverpool Stanley, Everton and St Judes at youth level before signing for Preston North End in 1887, where he played alongside his brother. Later that year he joined Aston Villa, where he scored 7 goals in 14 appearances as an inside-right. The following year he was sold to Derby County, re-joining his brother, where he would stay for the next fourteen seasons, playing over 400 games and scoring more than 50 goals for the club. He was primarily a centre-half at County and helped them reach three FA Cup finals and finish as runners-up in the League in 1896.

In 1899, following a change of rules governing non-resident players, he won the first of 10 caps for Ireland and in 1903 assisted his country in winning the Home Championship.

Joining Argyle in 1903, he was first choice in the newly professional side but left suddenly in November 1903 with stories suggesting that he appealed to the FA over the validity of his transfer. In January 1904 he became player-manager of Glossop and also had a brief spell with Wolverhampton Wanderers, making his final League appearance at the age of 41 in December 1905.

Reports describe Goodall as 'rumbustuous' and 'cussed' and there is no doubt he was quite a character. As well as engineering his sudden departure from Home Park, there are many stories of ill-discipline. Whilst with Derby he is said to have refused to play extra time in a United Counties League Cup Final, claiming that his contract only required him to play for 90 minutes. Just before the 1899 FA Cup Final he was suspended for 'insubordination and inattention to training'. He later toured Europe and America with a strongman act, 'walking' around a giant metal hoop.

Greens on Screen is run as a service to fellow supporters, in all good faith, without commercial or private gain.  I have no wish to abuse copyright regulations and apologise unreservedly if this occurs. If you own any of the material used on this site, and object to its inclusion, please get in touch using the 'Contact Us' button at the top of each page. Search facility powered by JRank Search Engine. Hover facility courtesy of Milonic. UK time at page load: 28 May 2022, 05:35.