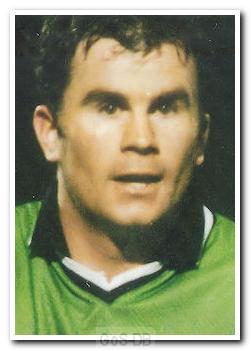 Released by Oxford United in 1994, the Boston-born centre-forward ended up at Yeovil Town - then a non-league club - and promptly scored 23 goals in 25 games. Naturally his list of Football League suitors grew with every strike, and it was Birmingham City manager Trevor Francis who eventually took the plunge, forking out £75,000 for his signature. Forinton top-scored for City's reserves in his debut season, but his first team chances were restricted and Argyle boss Kevin Hodges made a successful loan approach in a bid to bolster his side's faltering promotion challenge. The then 23-year-old found the net three times in eight starts in a green shirt, but that two of them came in a pair of Devon derbies against Exeter City drastically inflated his stock among Argyle fans. So much so that, despite Francis insisting Forinton was not for sale, a group of Argyle supporters attempted to raise the cash to buy him - an admirable effort that was doomed to failure considering his manager's resolute stance.

Despite once again leading the scoring charts in the reserves at St Andrew's, Forinton was eventually sold to Peterborough United for £250,000. He endured an injury hit three years at London Road, scoring 10 goals in 50 games, and following brief spells at Torquay and back at Yeovil, he drifted back into non-league football and eventually retired in 2009 after two years at Banbury United.

Greens on Screen is run as a service to fellow supporters, in all good faith, without commercial or private gain.  I have no wish to abuse copyright regulations and apologise unreservedly if this occurs. If you own any of the material used on this site, and object to its inclusion, please get in touch using the 'Contact Us' button at the top of each page. Search facility powered by JRank Search Engine. Hover facility courtesy of Milonic. UK time at page load: 17 May 2021, 16:15.