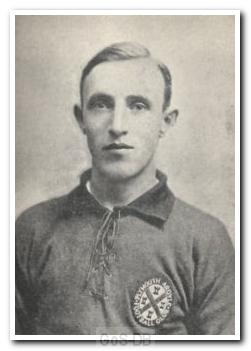 1. Came from: Denny Hibernians   Went to: Career interrupted by WW1

Forbes began his career with his hometown club, Denny Hibernians, and was a reserve for the Scottish junior international side. In August 1911 he moved south to join Argyle, beginning a 13 year relationship with the club. After a slow start to his time at Home Park, he became a regular member of the first team during the 1914-15 campaign but World War One interrupted his progress. During the conflict he worked at, and played for, the Devonport Dockyard. A versatile defender, he could play at right-back, left-back or as a half-back, but is best remembered for his tremendous full-back partnership with Moses Russell, whom he played alongside 181 times.

When football resumed after the war, Forbes was a fixture in the Argyle first team for the next five years. He made his final appearance for the club in April 1924, but did accompany the team on the tour of South America that summer, and was still on the books at the beginning of the following season. He retired from professional football shortly after, but did go on to play for Fall River Marksmen in Massachusetts, USA.

Greens on Screen is run as a service to fellow supporters, in all good faith, without commercial or private gain.  I have no wish to abuse copyright regulations and apologise unreservedly if this occurs. If you own any of the material used on this site, and object to its inclusion, please get in touch using the 'Contact Us' button at the top of each page. Search facility powered by JRank Search Engine. Hover facility courtesy of Milonic. UK time at page load: 19 June 2021, 01:22.