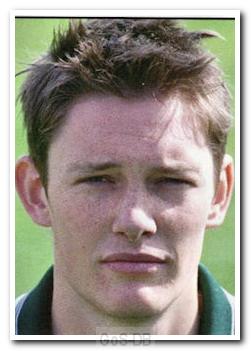 Plymouth-born Steve Adams was a product of the youth team set up at Argyle, working his way through the ranks to be first offered a trainee contract and then a professional contract with his hometown club. He was a ball-winning defensive midfielder, whose value to the team often went unnoticed by the Green Army faithful but was valued greatly by the managers, most notably Paul Sturrock.

Adams made his debut for the first team, aged 18, in December 1998 coming on as a substitute for Mick Heathcote in a Football League Trophy game away to Brentford. His league debut though had to wait until the last game of the following season away against Mansfield Town. The arrival of Paul Sturrock at the club in October 2000 saw the emergence of Adams as a vital cog in his teams and Argyles successes over the following years.

He was an ever-present member of the side that won Division Three in 2001-2002 and a vital member of the team that won the Second Division title two years later weighing in with two goals during each campaign.

He was again a regular in the Argyle team in the Championship during 2004-05; however Sturrock, now manager of Sheffield Wednesday, took him to Hillsborough in March 2005. An achilles injury hampered his Owls career and he was released by Sturrocks replacement, Brian Laws in 2007. This provided the perfect opportunity for Adams and Sturrock to be re-united once more; this time Sturrock signed him on a short-term contract for Swindon Town in August 2007 to bring solidness to help his back four.

He was offered another short term contract at Swindon in January 2008, but opted for a two-and-a-half-year deal at Torquay United in the Conference Premier instead. He became a regular as Torquay made the play-offs and FA Trophy Final. Torquay loaned him to Forest Green Rovers in August 2009, but a return of three goalless draws and three defeats saw him back at Plainmoor. He was loaned out to Truro City, for whom he signed a permanent deal in the summer of 2010, after which he then moved on to South West Peninsula Premier League Callington Town in 2013.

Greens on Screen is run as a service to fellow supporters, in all good faith, without commercial or private gain.  I have no wish to abuse copyright regulations and apologise unreservedly if this occurs. If you own any of the material used on this site, and object to its inclusion, please get in touch using the 'Contact Us' button at the top of each page. Search facility powered by JRank Search Engine. Hover facility courtesy of Milonic. UK time at page load: 03 December 2021, 13:14.