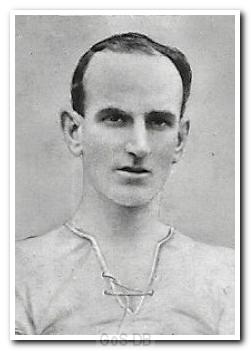 Durnin was born in Campbeltown, Argyll and began his career with hometown side Campbeltown Academical. After a brief spell with Doncaster Rovers he joined Argyle in June 1914 and became a regular member of the first team at right-half. During the war he returned to Scotland, playing as a guest for Partick Thistle and Dumbarton. He made 25 appearances for the Jags during the 1916-17 season.

Durnin returned to Plymouth following the conflict but left to join Swansea Town in July 1919. After four years there he became player coach at Llandrindod Wells and his last recorded club was Northampton Town, with whom he had a trial in November 1924.

Greens on Screen is run as a service to fellow supporters, in all good faith, without commercial or private gain.  I have no wish to abuse copyright regulations and apologise unreservedly if this occurs. If you own any of the material used on this site, and object to its inclusion, please get in touch using the 'Contact Us' button at the top of each page. Search facility powered by JRank Search Engine. Hover facility courtesy of Milonic. UK time at page load: 23 May 2022, 19:39.