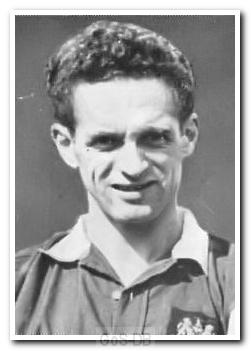 Scotsman Dougall started his career at Burnley before the start of World War Two. During the war he played as a guest for Oldham Athletic, Watford, Walsall and Coventry City and also played for Scotland in unofficial wartime internationals. He failed to break into the first team after returning to Turf Moor, and joined Birmingham City, where he won his one and only full Scottish cap in 1946. He spent three years at St Andrews before dropping down a division to join Argyle in 1949. After a difficult first season at Home Park, Dougall settled into the right-half position where his speed and intelligent use of the ball was at its most effective. Right-half was his best position, but it was Dougall's versatility that made him such a popular figure with the manager and supporters. After a spell as player-coach and chief-coach, where he shared managerial duties with George Taylor, he was named Argyle manager in 1961. By his own admission he was not cut out for management and soon returned to coaching and scouting, working for the club until the early 1970s.

Greens on Screen is run as a service to fellow supporters, in all good faith, without commercial or private gain.  I have no wish to abuse copyright regulations and apologise unreservedly if this occurs. If you own any of the material used on this site, and object to its inclusion, please get in touch using the 'Contact Us' button at the top of each page. Search facility powered by JRank Search Engine. Hover facility courtesy of Milonic. UK time at page load: 07 May 2021, 20:36.