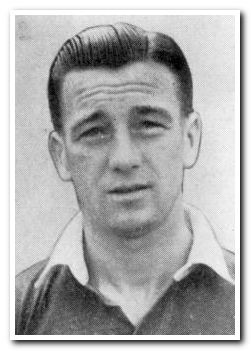 Dobbie began his career with his local Wearside League club, South Bank, before signing for Middlesbrough in 1946. He spent three years at Ayresome Park where he established a reputation as a pacy goalscorer, despite only occasional appearances for the first team. It was his prolific form in the reserves, however, that brought him to the attention of Argyle, and he moved south. A diminutive centre-forward, he could not break into the first team on a regular basis, generally serving as a deputy for Maurice Tadman, and in 1953 he moved on to Torquay United in an exchange deal that brought Ernie Edds back to Home Park. In a far more successful four-year period at Plainmoor he scored nearly 50 goals in 110 games before ending his career with non-league Weymouth.

Greens on Screen is run as a service to fellow supporters, in all good faith, without commercial or private gain.  I have no wish to abuse copyright regulations and apologise unreservedly if this occurs. If you own any of the material used on this site, and object to its inclusion, please get in touch using the 'Contact Us' button at the top of each page. Search facility powered by JRank Search Engine. Hover facility courtesy of Milonic. UK time at page load: 07 December 2021, 08:35.