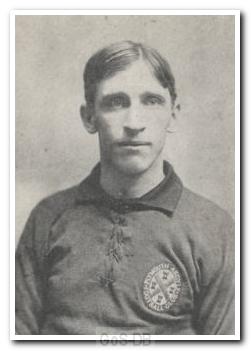 Note: There is some evidence that he was commonly known as Arthur, but the reason is not known. He had two brothers who were also on the Argyle books, but who did not play for the first team: Andrew Armour Dixon and Joseph Armour Dixon.

1. Came from: Fulham   Went to: Career interrupted by WW1

Dixon was born in Willington-on-Tyne, near Newcastle, in 1887. He played local football for Willington Athletic, Crawcrook Villa and Newcastle City before turning professional with Fulham in 1909. He made just a single appearance there before joining Argyle for a fee of £300 in December 1910. Over the next seven seasons, either side of World War One, he made almost 200 appearances for the club. These were primarily at outside-left, but he also played at inside-left when required.

Dixon's speed caused the opposition great problems and the club handbook of 1911-12 states that he "is probably the fastest forward in England. Acts like a pacemaker in a forward line and has a great shot". In August 1920 he played in Argyle's first ever Football League fixture and was involved in the build up to the first goal, scored by Jimmy Heeps. The following year Dixon left Home Park, finishing his career with a short spell at Barrow.

Greens on Screen is run as a service to fellow supporters, in all good faith, without commercial or private gain.  I have no wish to abuse copyright regulations and apologise unreservedly if this occurs. If you own any of the material used on this site, and object to its inclusion, please get in touch using the 'Contact Us' button at the top of each page. Search facility powered by JRank Search Engine. Hover facility courtesy of Milonic. UK time at page load: 08 December 2021, 16:40.