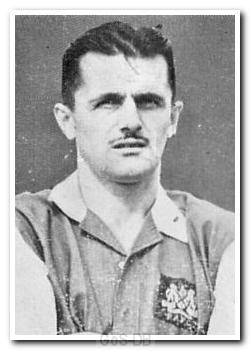 2. Came from: Career interrupted by WW2   Went to: Poole Town

On Sunday 3rd September 1939, Britain declared war on Germany. Restrictions on travel and a ban on the assembly of crowds were immediately imposed, forcing the Football League to bring the 1939-40 season to an end. A few weeks later, seven regional competitions were introduced, including the South West Regional League, in which Argyle played for just one season. Five years passed before the next first team competition at Home Park, the Football League South, after which the conventional Football League resumed the following year. Dixon was one of only two players to play for the club in all three league competitions; the other was fellow Lancastrian Bill Hurst.

Born in Burnley, Dixon began with local non-league side Hapton United and also had an association with his hometown's League team before arriving for a trial in Plymouth in December 1938 (Hurst followed from Burnley a few months later). At the age of 19 the centre-half played four games for Argyle in the second half of the South West Regional League season, his last opportunity for many years at Home Park. His war service was with the RAF, which included action in West Africa. Based at RAF Holmsley South, near Christchurch in Hampshire, he earned his sergeant's stripes and became a Physical Training Instructor. From there he played as a guest for Bournemouth & Boscombe Athletic, appearing 12 times in 1940-41 and 14 times in 1941-42, after which the Hampshire club did not compete until 1945-46.

Dixon played eight more times for Bournemouth as a guest and scored his only goal for the Cherries in the early part of the 1945-46 season, before travelling regularly to play for Argyle in their Football League South campaign, and a year later was first choice in the heart of the Pilgrims' defence in the first season of the resumed Football League Division 2. However, he gradually assumed the role of understudy, first to John Oakes, then Ray Goddard and finally Jack Chisholm, although even as a second fiddle, was renowned for his sound and reliable performances whenever called upon. After a much interrupted decade, almost a century of appearances for the club and having turned 30, he moved to Poole Town in 1950 and, having spent his wartime years in the area, remained in Bournemouth after retiring from the game.

Greens on Screen is run as a service to fellow supporters, in all good faith, without commercial or private gain.  I have no wish to abuse copyright regulations and apologise unreservedly if this occurs. If you own any of the material used on this site, and object to its inclusion, please get in touch using the 'Contact Us' button at the top of each page. Search facility powered by JRank Search Engine. Hover facility courtesy of Milonic. UK time at page load: 19 May 2022, 20:20.