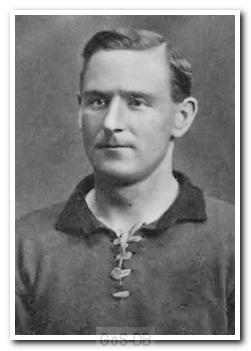 Born in Crawshawbooth, Lancashire in 1899, Dickinson was a useful half-back who could play on either the left or right side. He began his career with his local team, Rossendale United, and also played for Great Harwood Town before joining the Royal Navy. Stationed in Plymouth during the war, he played for the Royal Naval Barracks, Devonport before signing for Argyle in June 1919. After 26 Southern League games in his first season at Home Park he made his mark in history by being selected as one of the starting XI for Argyle's debut League fixture against Norwich City in August 1920.

A consistent performer, Dickinson was a regular member of the Argyle side over the next four years but made only two appearances during 1924-25, his final season with the club. He then returned to the North West, signing for Wigan Borough, but failed to make an impression on the first team before a brief spell back at Rossendale United. In 1926 Dickinson enjoyed a brief resumption of his League career, with, ironically, Norwich City, playing sixteen games in their 1926-27 campaign.

Greens on Screen is run as a service to fellow supporters, in all good faith, without commercial or private gain.  I have no wish to abuse copyright regulations and apologise unreservedly if this occurs. If you own any of the material used on this site, and object to its inclusion, please get in touch using the 'Contact Us' button at the top of each page. Search facility powered by JRank Search Engine. Hover facility courtesy of Milonic. UK time at page load: 19 June 2021, 01:28.