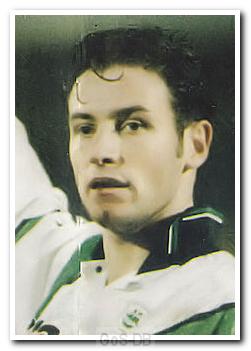 Signed from Torquay United in late 1995, Neil Warnock drafted in the young centre-back to strengthen Argyle's promotion-chasing squad. With Mick Heathcote, Richard Logan and Keith Hill ahead of him, Curran made just nine starts as Argyle won promotion through the playoffs - though one of those did come in the playoff final at Wembley itself.

The Birmingham-born defender was out of the side more often than he was in it the following season, but did rack up 22 appearances as Argyle consolidated at third-tier level. However, with Warnock gone, Curran was sold for £20,000 to Exeter City - and thus became a member of that rare band of players to have worn the shirts of all three Devon clubs.

Greens on Screen is run as a service to fellow supporters, in all good faith, without commercial or private gain.  I have no wish to abuse copyright regulations and apologise unreservedly if this occurs. If you own any of the material used on this site, and object to its inclusion, please get in touch using the 'Contact Us' button at the top of each page. Search facility powered by JRank Search Engine. Hover facility courtesy of Milonic. UK time at page load: 25 June 2021, 05:17.