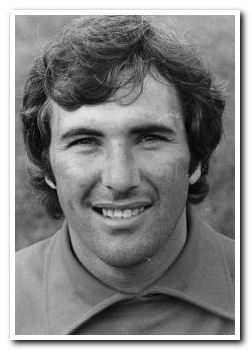 Born in Wolverhampton on St Valentine's Day 1952, Crudgington began his career at his hometown club, having been spotted in his teens by Wolves' legend and Argyle war-time guest player, Joe Gardiner. Crudgington's time in the Molyneux youth set-up included three England schoolboy caps and a Wolves 'A' team game against a Coventry City side that included future Home Park team-mate Colin Randell.

Unable to push for a first team place with Wolves, Crudgington moved to Aston Villa but made just four league appearances in two years and also had loan spells with Barnsley, Bradford City, Preston North End and Toronto Metros in the North American Soccer League before he was sold to Crewe Alexandra. He spent six years and 250 league games with the Cheshire club before moving on to Swansea City, for whom he played 52 times. When Argyle sold Martin Hodge, Crudgington was seen as the experienced goalkeeper that the Pilgrims desperately needed. He was a solid, all-round keeper and a vital part of the 1984 team that reached the semi-final of the FA Cup, ironically for Geoff, at Villa Park, and was also part of Dave Smith's 1985-86 promotion-winning side.

A great display of goalkeeping or defending is often referred to as 'parking the bus' (in front of the goal), but Crudgington once went one better and surprised his team-mates by driving the team coach half way home from an away game, having obtained the appropriate licence in his time at Crewe. In total, he made nearly 400 appearances for the Pilgrims and was only really challenged for the number one jersey by Steve Cherry during Cherry's first spell at Home Park in 1986-87, when both played 21 games apiece. Popular with team-mates and fans alike, he hung up his professional gloves in 1989 and then played briefly for local side Millbrook.

Although his playing days were over, Crudgington was deservedly awarded a testimonial game on the evening of 26th January 1990 when Argyle lined up against a full-strength Tottenham Hotspur side, including Paul Gascoigne and Gary Lineker - the date was free because both clubs had been knocked out in the third round of the FA Cup. 'Crudgie' then spent three years as part of the club's backroom staff but left Home Park under David Kemp, shortly after Ken Brown's tenure as manager had ended. For the following eight years he combined occasional coaching for the FA and the Devon FA with a job in a local electrical shop - ironically it was Beacon Electrical, the club's former shirt sponsor who at one stage in his career would have been emblazoned across the jersey he wore each week.

Crudgington returned to Home Park in 1999 as the youth and reserve team coach, and went on to be the club's Football in the Community Officer before, for many years, goalkeeping coach, warming up the 'keepers on match days. Geoff finally ended his time at Home Park a few weeks short of this 59th birthday, a casualty of the club's 2010-11 financial crisis. Thus ended nearly a quarter of a century's service to the club.

Unable to resist straying too far from the game, he again made use of his Public Service Vehicle (PSV) licence: as well as ferrying children and students, he has driven the team coach for Torquay United and also Plymouth Albion RFC on match-days.

A reliable opening batsman and slip-catcher, "Crudgie" played cricket for Tavistock for many years.

I was the manager of Wallace Arnold Coaches in Plymouth, and I was at the depot in West Hoe one day, when I was amazed to see Crudgie. As a life long Greens supporter, I was delighted to speak to him, but even more surprised when he asked if I had any driving jobs on a part time basis. Of course, we welcomed him with open arms, and he drove for us on quite a number of occasions, and drove the team coach, and played! The manager eventually said he had to stop driving the team coach, so our ways parted. He was always the perfect gentleman, a credit to the club, and an unexpected ambassador when ...  More

I was the manager of Wallace Arnold Coaches in Plymouth, and I was at the depot in West Hoe one day, when I was amazed to see Crudgie. As a life long Greens supporter, I was delighted to speak to him, but even more surprised when he asked if I had any driving jobs on a part time basis. Of course, we welcomed him with open arms, and he drove for us on quite a number of occasions, and drove the team coach, and played! The manager eventually said he had to stop driving the team coach, so our ways parted. He was always the perfect gentleman, a credit to the club, and an unexpected ambassador when he turned up behind the wheel of a coach.

I knew Geoff at school in the late fifties, early sixties, when we were at Loxdale Junior School, Bilston.

He sat behind me and was top of the class and head boy but rather shy.

You could tell then that he would make it as a goalkeeper as he was easily the best for miles, I think playing for Staffordshire first team.

He went on to the local grammar school and I to the comprehensive, so I lost touch, later moving to Nottingham with my family.

It was good to read about his footballing career.

Greens on Screen is run as a service to fellow supporters, in all good faith, without commercial or private gain.  I have no wish to abuse copyright regulations and apologise unreservedly if this occurs. If you own any of the material used on this site, and object to its inclusion, please get in touch using the 'Contact Us' button at the top of each page. Search facility powered by JRank Search Engine. Hover facility courtesy of Milonic. UK time at page load: 04 July 2022, 09:44.