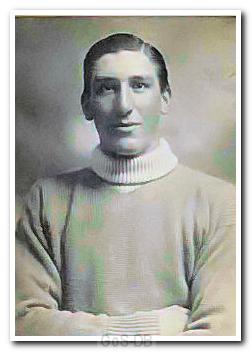 Craig was born in Larkhall, Lanarkshire in 1893. He began playing football as a juvenile with Glenview and from there stepped up to Larkhall United in 1909. A year later he was with Ross Rovers in Ferniegair and gained a county cap against Ayrshire Juniors before joining Larkhall Thistle, Scotland's oldest junior club, in 1911. (A junior club in Scotland is broadly the equivalent of a non-league club in England, and does not imply a young team.) It was whilst playing for Thistle that he was spotted by Bob Jack, who signed him for Argyle in July 1912.

After two years as understudy to 'Tich' Horne, Craig took over as first-choice 'keeper midway through the 1914-15 campaign. However, the First World War, already a year old, finally called a halt to football at the end of that season and Craig found himself driving heavy trucks between London and the Channel ports. He played briefly for Brentford before returning to Scotland, where he played for Royal Albert, Vale of Leven, St. Johnstone, Ayr United, Hamilton Academical and Motherwell during the war. He made his Hamilton debut in March 1916, the first of 42 games and nine clean sheets for the club.

Greens on Screen is run as a service to fellow supporters, in all good faith, without commercial or private gain.  I have no wish to abuse copyright regulations and apologise unreservedly if this occurs. If you own any of the material used on this site, and object to its inclusion, please get in touch using the 'Contact Us' button at the top of each page. Search facility powered by JRank Search Engine. Hover facility courtesy of Milonic. UK time at page load: 13 August 2022, 06:40.