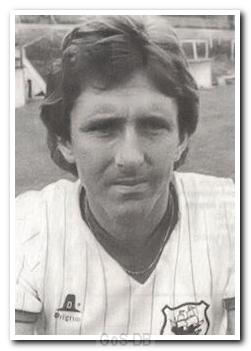 Cook was a Hartlepool-born forward with an unusual beginning to his football career: he started out as a prolific marksman for the now defunct Greek-influenced South African side Hellenic, for whom he scored 46 goals in 64 appearances in the leagues around Cape Town. This proved enough to earn him a chance back in England with Stoke City, to whom he moved in 1977. In a four-year spell at The Victoria Ground, he played 30 times, scoring five goals. During his time in the Potteries, he had two loan spells: to Bradford City in 1978-79 where he played eight times, scoring once, and to Argyle in 1979-80 where he scored five goals in seven games. After leaving Stoke City permanently in 1981, he elected to return to Home Park and continued to score regularly over the following two seasons. He then returned north with Halifax Town for a two-year stay before moving into non-league football in the twilight of his career with Worksop Town, North Ferriby United and Ferryhill Athletic.

Greens on Screen is run as a service to fellow supporters, in all good faith, without commercial or private gain.  I have no wish to abuse copyright regulations and apologise unreservedly if this occurs. If you own any of the material used on this site, and object to its inclusion, please get in touch using the 'Contact Us' button at the top of each page. Search facility powered by JRank Search Engine. Hover facility courtesy of Milonic. UK time at page load: 03 December 2021, 13:52.