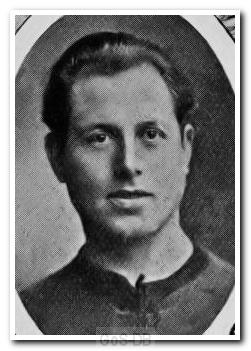 Born in Hayle, Cock played as an amateur for West Kensington United, Forest Gate, Old Kingstonians and Brentford before signing as a professional with Huddersfield Town in 1914. The outbreak of World War One put his career on hold and he was awarded the military medal for bravery after he was wounded in the conflict. He was also, at one time, reported to have been killed in action. After the war he re-joined Huddersfield and won his first full cap for England, scoring in a Victory international against Wales. Cock then spent three years with Chelsea, earning two more England caps, before moving on to Everton.

Greens on Screen is run as a service to fellow supporters, in all good faith, without commercial or private gain.  I have no wish to abuse copyright regulations and apologise unreservedly if this occurs. If you own any of the material used on this site, and object to its inclusion, please get in touch using the 'Contact Us' button at the top of each page. Search facility powered by JRank Search Engine. Hover facility courtesy of Milonic. UK time at page load: 08 December 2021, 16:29.