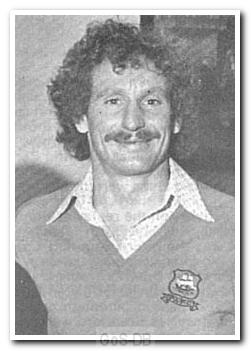 Clarke started his career as a youth with Arthurlie before moving to Arsenal in 1963. However, the Glaswegian central defender could not make the breakthrough at Highbury and left in 1965 to move to relative League newcomers Oxford United. This proved to be a seminal move as he spent 13 years at The Manor Ground, playing 444 games to etch himself into United's folklore, and is often credited with scoring one of the greatest goals in Oxford's history, against Watford in the FA Cup in 1971. After finally leaving The Manor Ground, he briefly moved to the USA in 1978 to play 17 times for the Los Angeles Aztecs, whose squad that season also included George Best, before returning to the UK to sign for Argyle. After spending a solid season at Home Park in 1978-79 he then accepted an offer to become player-manager of Kettering Town, a position he held for three years within which he led The Poppies to a runners-up spot in the Alliance Premier League before resigning to a take up the same post with Corby Town. He later held roles with Stafford Rangers and Launceston before going on to work within the Youth Team set-ups at Charlton Athletic and Aston Villa. Perhaps enthused by his earlier dalliance with the Los Angeles Aztecs, he then returned Stateside and to fulfil coaching roles with the University of South Carolina at Aiken, Augusta Arsenal Gunners, Brookestone High School in Georgia and the University of Tulsa.

Greens on Screen is run as a service to fellow supporters, in all good faith, without commercial or private gain.  I have no wish to abuse copyright regulations and apologise unreservedly if this occurs. If you own any of the material used on this site, and object to its inclusion, please get in touch using the 'Contact Us' button at the top of each page. Search facility powered by JRank Search Engine. Hover facility courtesy of Milonic. UK time at page load: 25 June 2021, 04:34.