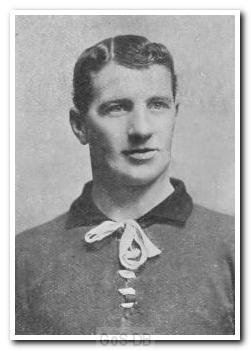 Clark began his career with his hometown club, Scottish junior side Thorniewood, before joining Hamilton Academical. In his early days at Hamilton, Clark found it difficult to combine football with his other passion, music, and on more than one occasion the latter took precedence. As well as playing 60 times over three years for his club, he was also chosen to represent Lanarkshire Juniors against Glasgow in 1898 and the Senior side against Ayrshire in 1901.

Clark created history in his time at Douglas Park by becomming the first player to score a hat-trick for Accies in a League match (on November 5th, 1898 against Port Glasgow Athletic), almost a year to the day after Accies' first League game.

Originally a forward, he was converted to centre-half and it was his performances in the half-back line that brought him to the attention of Everton, whom he joined in 1901 for a fee of £60. After two seasons at Goodison Park, where he struggled to break into the first team (just six appearances, scoring once), he moved to Home Park in the summer of 1903 to be one of Frank Brettell's new Plymouth Argyle.

Clark was one of the most reliable and consistent members of Argyle's first professional side, and was virtually an ever-present across six seasons with the club. In his second season he received a Western League winners' medal and played a remarkable 54 times. Not surprisingly, he was described as 'absolutely untiring' and 'always a dominating factor in a game' and was an extremely popular captain when given the role in 1906. After leaving Argyle he spent a single season with Crystal Palace before retiring in 1910.

Greens on Screen is run as a service to fellow supporters, in all good faith, without commercial or private gain.  I have no wish to abuse copyright regulations and apologise unreservedly if this occurs. If you own any of the material used on this site, and object to its inclusion, please get in touch using the 'Contact Us' button at the top of each page. Search facility powered by JRank Search Engine. Hover facility courtesy of Milonic. UK time at page load: 17 May 2021, 17:18.