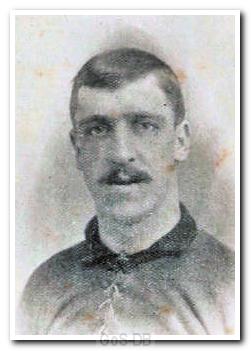 Note: At least two record books list Argyle's goalscorers for the FA Cup match against Freemantle on 14th Nov 1903 as Peddie (2), Winterhalder and Picken (2), but reports of the match in the Western Morning News, Western Evening Herald and other newspapers clearly describe the goals by Peddie, Picken (2), Jack and Anderson. The overall goal totals for Peddie, Winterhalder, Jack and Anderson are therefore different from some other sources.

Anderson, born in Middlesbrough in 1879, began his career with Darlington and also played for Thornaby Utopians before joining Sheffield United in 1899. After two seasons there he moved to Woolwich Arsenal where he scored ten goals in 28 appearances. He arrived at Home Park in 1903 and was the regular inside-right in Argyle's first professional season.

In February 1904 Anderson contracted pneumonia but carried on playing, ignoring doctors' advice. He collapsed following a game at Fulham and was rushed to a London hospital but died four days later. A memorial fund was set up by the club and a souvenir handbook produced, in which he was described as 'one of the greatest, cleverest and whole-hearted players a club ever commanded'.

Greens on Screen is run as a service to fellow supporters, in all good faith, without commercial or private gain.  I have no wish to abuse copyright regulations and apologise unreservedly if this occurs. If you own any of the material used on this site, and object to its inclusion, please get in touch using the 'Contact Us' button at the top of each page. Search facility powered by JRank Search Engine. Hover facility courtesy of Milonic. UK time at page load: 03 December 2021, 13:25.