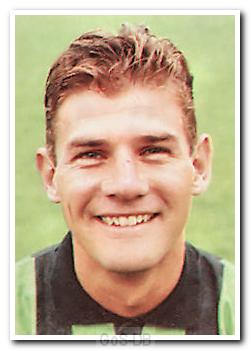 Barrel-chested, with the thighs of an ox and golden, slicked-back hair, Steve Castle could have walked straight out of the 1950s - when men were men and the footballs were made of bear hide. But it was in 1980s football that Castle embarked on a career that promised much at its outset but probably fell short of delivering its potential.

Greens on Screen is run as a service to fellow supporters, in all good faith, without commercial or private gain.  I have no wish to abuse copyright regulations and apologise unreservedly if this occurs. If you own any of the material used on this site, and object to its inclusion, please get in touch using the 'Contact Us' button at the top of each page. Search facility powered by JRank Search Engine. Hover facility courtesy of Milonic. UK time at page load: 29 June 2022, 19:31.